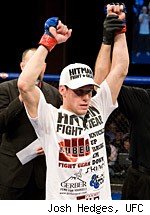 At first glance, not much seems to have changed in the MMA bantamweight division in the last three months. All the top bantamweights in the WEC -- Brian Bowles, Miguel Torres, Dominick Cruz, Takeya Mizugaki, Rani Yahya and Joseph Benavidez -- fought on August 9, and since then they've just been biding their time for their next fight.

But I have a new name in my new ranking of the Top 10 bantamweights in mixed martial arts: Bibiano Fernandes. Yes, I know the title Fernandes just won is the Dream featherweight belt, not the bantamweight belt. But Fernandes weighed in at 138 pounds in the Dream tournament, and if he were ever to fight in the WEC, I think he'd be a bantamweight.

And so Fernandes is listed as a bantamweight in my new rankings, which are below.

Top 10 Bantamweights in MMA
1. Brian Bowles: Likely to defend his title against Cruz in January.

2. Miguel Torres: Says he's totally focused on a rematch with Bowles, but he'll have to win at least one fight before he gets that shot.

3. Takeya Mizugaki: His fight with Torres in April was a classic; is a rematch coming?

4. Dominick Cruz: Will need to take advantage of his height and reach advantage against Bowles.

5. Rani Yahya: May have the best submissions in the bantamweight division.

6. Joseph Benavidez: I'd love to see him move down to flyweight, but the WEC is in no hurry about adding a 125-pound class.

8. Eduardo Dantas: Will Shooto give him another shot at Ueda?

9. Bibiano Fernandes: The Dream champ needs some time off after suffering a cut above the eye in beating Hiroyuki Takaya.

10. Akitoshi Tamura: Had to pull out of a scheduled fight with Damacio Page at WEC 43; that fight might happen in December.