Mackens Semerzier on His MMA Upset of the Year: 'I Fully Expected to Win'

Upon authoring perhaps the biggest upset of the year in mixed martial arts, Mackens Semerzier nonchanlantly rose from the canvas, whispered a thanks to his fallen opponent Wagnney Fabiano for the opportunity to compete against him, and simply smiled to the camera broadcasting the shocker to the world.

No one would have objected if Semerzier, who according to multiple MMA wagering sites entered the bout as the biggest underdog of the 10-card WEC event, pulled out a bottle of champagne and uncorked it right in the center of the cage. Instead, he illustrated the maturity that led to his win in the first place by controlling his emotions in a supercharged moment.

"I say this with total confidence: I fully expected to win," said the previously little-known Semerzier, who improbably submitted top three featherweight Fabiano with a triangle choke. "Not that I walk around saying I can beat anyone, but that's a thing for me in life: you can always win. You can always find a way. I always thought, 'I'm going to figure out a way to do it. So when I win, it doesn't surprise me."

In the annals of MMA, you can find more storied upsets. Matt Serra was a 10-1 underdog when he defeated Georges St. Pierre for the UFC welterweight title. Maurice Smith's defeat of Mark Coleman was a stunner when it happened in 1997. But seldom do you see a virtual unknown upsetting a top three fighter in his division.

And as equally surprising as the result was the method.

Within 10 seconds of the start of the featherweight matchup, WEC play-by-play announcer Todd Harris voiced the danger that most fans were likely thinking.

"If I'm Mackens Semerzier and I'm coming into my first WEC bout, and I draw Wagnney Fabiano, the first thing I'm thinking is, 'I do not want to go to the ground with this guy,'" Harris told the viewing public.

With a decorated black belt pedigree in jiu-jitsu, Fabiano (12-1 going into the match) was thought to have an insurmountable edge on the ground, and 60 seconds in, he put the purple-belt Semerzier to the test with a takedown. The Virginian (4-0 before the bout, but all in regional shows), stayed active, looking for a sweep and disrupting the Brazilian's balance. When Fabiano tried to re-establish his position, Semerzier seized on a split-second mistake and locked up a triangle choke.

Most watching in person or around the world likely expected Fabiano to escape. While Semerzier was warming up, even his cornerman, ex-WEC bantamweight king Miguel Torres, had told him that if he cinched the triangle, he should add a few elbows in hopes of bloodying Fabiano before he escaped to at least put doubt in his mind.

He remembered Torres' advice and threw a few elbows, then pulled Fabiano's head down to stop the blood flow and hooked his leg to prevent escape.

The 28-year-old Semerzier's fighting confidence was born of experience. He grew up in a housing project in the Little Haiti section of Miami, where he would occasionally scrap with other neighborhood kids. 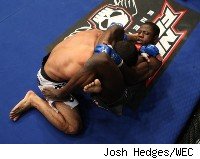 While he categorizes his experience at home with his two brothers, two sisters and a host of cousins as enjoyable, in high school, Semerzier was bussed to G. Holmes Braddock High, a predominantly Latino school that housed around 5,000 students. Semerzier joined the wrestling team, but never found full acceptance and would often be challenged to fight.

"I never picked on or sought out anyone to fight," he said. "They'd say something to me, and I'd try to walk away, but they'd follow me and it would get to a point where I couldn't walk away. I did my own thing. I was quiet. I was against the norm. And I guess that's why they would target me."

By his senior year, Semerzier was channeling his athletic gifts to wrestling and was good enough that he was expecting to go to Waubonsee Community College in Illinois to continue on in hopes of eventually landing a scholarship. On the way, however, his confidence was shaken by a series of three losses, causing him to reconsider his options.

On January 11, 1999 Semerzier found a new path, signing on to the U.S. Marines. By August of that year, he was in boot camp. He served for eight years, and saw duty in places like Iraq, Kosovo and Liberia.

"When I joined, there was nothing really going on, and I remember thinking, 'What if there is a battle? What would I really do? Could I really do the life-saving techniques I've been taught?'" he said. "And it's funny, you hear people speculating on that stuff even in MMA. You hear people say, 'If I was in this move, what would I do? I wouldn't tap out. I would rather let him break my arm.' And I can tell you, you don't know how you'll react until you're faced with adversity. They think they're confident, but it's really foolishness."

During his time in the Marines, he began boxing training and then through a Marine Corps Martial Arts program, he began learning other elements of the MMA game, which he would supplement with training at civilian gyms, most notably Linxx Academy in Virginia Beach, where he still trains and coaches.

But the seeds for his big break in WEC were planted when his friend James Gamble introduced him to then-WEC bantamweight champ Torres. Semerzier eventually visited Torres to help him prepare for his title defense against Takeya Mizugaki, and the two struck up a fast friendship.

So when Torres called him to tell him Fabiano's opponent Eric Koch had withdrawn due to injury, Semerzier had to consider the opportunity, even if he didn't originally think it to be the best idea.

"It wasn't something I was planning for, and I plan things out meticulously," he said. "I put timelines on things, and I was thinking next summer would be about right. But Miguel was telling me, 'You got it. I think you'll do good. Whenever you think you're ready, I'll see what I could do.'"

Semerzier didn't have long to think about it. The fight was only two weeks away, but one thing helped sway his decision, and that was the fact that he was in fight-ready shape. He, too, had been scheduled to compete in early October only to have his opponent pull out.

Asked how he could even consider a fight with a top-three featherweight at this early point of his career, Semerzier is blunt.

"I said, 'F*** him,"" he said. "And I want people to know I don't mean that in any disrespectful way at all. I'm actually a huge fan of his, and he's a super-nice guy. When I started fighting, the 145-division wasn't popular so I'd go on Youtube and type in '145' and his videos would come up. I have always thought he was a great fighter. But I had to say that because I'm not scared of anybody and so I have to treat him like any other fighter. I always feel I can win."

Semerzier knows that he still has more climbing to do up the WEC ladder before anyone considers him among the elite or hands him a title opportunity, and it's work he's willing to put in. He says he just wants to have the chance to match up with complete, solid fighters who will push him.

True to his postfight behavior, there has been little celebrating going on. He used some of his postfight "Submission of the Night" cash bonus to help his family members and put the rest in the bank for his wife and three children. He'll continue on with his job as a Navy Combatives Instructor as well as his fight training.

The win may have stunned the MMA world, but it hasn't changed anything about Mackens Semerzier.

"I read a quote by Rickson Gracie that said something along the lines of, 'Victories achieved should be forgotten,' because the thought of past victory clouds your mind," he said. "That's why I don't have any of the trophies I ever won, or the belts I earned. All that stuff is thrown in the closet. I live very simply and I'm very focused on the future. When I get to that big moment, maybe I'll sit back and enjoy it, but right now the work is not done. I'm not there yet."