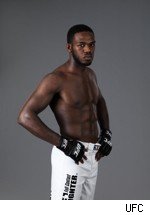 UFC light heavyweight Matt Hamill will return from a knee injury to take on rising star Jon Jones at The Ultimate Fighter 10 Finale on Dec. 5 at the Pearl in Las Vegas, the promotion announced Tuesday.

At 22 years of age, Jon Jones (9-0) already holds three UFC wins against Andre Gusmao, Stephan Bonnar and Jake O'Brien since debuting August 2008. Jones recently raised his stock in the eyes of MMA insiders with his decision to join Greg Jackson's team in Albuquerque, N.M., where he'll mix it up with the likes of Rashad Evans, Keith Jardine and Nate Marquardt.

Hamill (7-2), even at 33, remains a top prospect out of The Ultimate Fighter 3. His losses were against former champ Rich Franklin and a highly controversial decision to Michael Bisping. Hamill has won his last two and his most recent in March was a head kick knockout over Mark Munoz. Hamill was penciled in to face Brandon Vera at UFC 102 but pulled out due to a knee injury.

The two wrestling-based fighters are meeting in the main event of the card which will crown a heavyweight winner for the tenth season of the Spike TV reality television series.