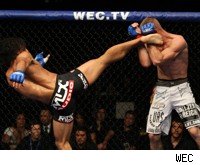 FanHouse has the official scorecards for the six fights that went to a decision at Saturday's WEC 43 in San Antonio, Texas.

The main event between Donald Cerrone and Ben Henderson has been much-discussed due to the close nature of the bout, but it was Raphael Assuncao vs. Yves Jabouin that had the head-scratchings scores of 29-28, 30-27 and 27-30.

Scoring the fights cageside at the event were Joel Elizondo, Ruben Carrion, Tony Townsend and Rick Crocker from the Texas athletic commission.

Other Notes: Medical suspensions were light for WEC 43, as only two fighters were suspended past October. Noah Thomas and Mushin Corbbrey were suspended until Nov. 10 ... As in the past with fighter salaries, the Texas commission does not disclose financial numbers because of privacy laws.