Henderson-Varner WEC Title Fight Will Be in Early 2010; Arizona Targeted 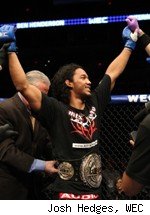 Jamie Varner's comeback will have to wait a little longer.

While the WEC had hoped to stage a matchup between lightweight champion Varner and new interim champion Ben Henderson in December, such a scenario has essentially been ruled out by Henderson's camp after the five-round thriller that took place this weekend.

After the grueling 25-minute struggle, Henderson will need some time off before jumping back into a new training camp, and the title fight will take place in the early months of 2010, Henderson's manager Jason Genet told FanHouse.

"Ben won't be ready for a December fight, and we are hoping for January or February," he said.

Seconds after Henderson had the belt strapped around his waist, WEC general manager Reed Harris could be heard on camera telling Henderson's corner to have him call out Varner for a December matchup.

Henderson did indeed let Varner know that a date awaits them, and asked for the fight in Arizona. It appears that location is a good possibility. Both Henderson and Varner call the state home, and Genet said that WEC is looking to host the fight there.

Henderson earned the shot at Varner by outdueling Donald Cerrone in a thrilling five-round matchup, fending off a series of submission attempts and mounting most of his offense with takedowns and ground and pound. In capturing his ninth straight win, he improved to 10-1.

Varner (16-2) first captured the belt with a TKO over Rob McCullough in Feb. 2008. In his second title defense, he squared off with Cerrone in Jan. 2009. The fight went to the judges' scorecard in the fifth after Varner suffered an unintentional, illegal knee to the face while down. Varner won a split-decision, but has been out ever since with a broken hand, necessitating the interim title situation.

Much of the leadup to the Henderson-Cerrone fight focused on the potential rematch with Cerrone and Varner, who have had an ongoing war of words in the interim, but now it appears such a matchup will have to wait well into the future while the title picture plays out.