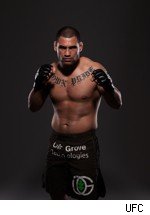 Heavyweights contenders Cain Velasquez and Ben Rothwell spoke Thursday to the media to discuss their fight in two weeks at UFC 104 on Oct. 24 in Los Angeles, Calif.

Rothwell (30-6), an almost nine-year veteran, will finally make his UFC debut when he squares off against the undefeated Cain Velasquez (6-0), a dominant wrestler out of the American Kickboxing Academy.

The winner is not guaranteed a title shot against the winner of the UFC 106 fight between Brock Lesnar and Shane Carwin, but it puts him within reach.

During the call, Velasquez and Rothwell were both asked to talk about each other's fighting style.

"Everyone knows he has a strong wrestling background," Rothwell said of Velasquez. "His standup is always improving. He's kind of being an athlete. He's able to work on everything, including his ground game so he's on his way to becoming as well-rounded as any of the top fighters could be. That's our goal and that's why it's going to be a great fight because we are probably more well-rounded than most."

"He's extremely well-rounded," Velasquez said. "He's been in this game for awhile. I think he has great hands. He has great kicks. I think pretty much he has everything to offer when he fights."

Rothwell said he didn't adjust his training too much from Gormley to Velasquez, as the two are both wrestlers. The main difference is the wider weight discrepancy. Rothwell said he currently weighs 265 pounds while Velasquez is 240.

"We had smaller guys to make up for the speed," Rothwell said. "I don't think Chase is as fast as Cain. Chase is more of a bigger guy, like the 280-type. Now I'm fighting a 240-wrestler that's faster, so that was the only difference we made."

Both fighters went through opponent changes before the UFC decided on the final matchup. Rothwell, who was originally scheduled to fight Chase Gormley, believes he benefited more from the change, as he now receives a better opportunity to make an immediate splash in the UFC.

"I feel great about the fight," Rothwell said. "I was about to fight a guy nobody had heard of, and that doesn't mean the guy is not tough, but it just means that it's a fight that you got everything to lose and really not much to gain.

Velasquez wasn't as happy with the change. The AKA fighter admitted he was disappointed when he first learned that he was being passed over by Carwin as the next opponent for Lesnar.

"Discouraging at first, but I really couldn't dwell on it," said Velasquez, who believes a title shot will eventually come.

In the UFC's return to Los Angeles since May 2006, Velasquez will have a strong Hispanic following behind him. Further, Velasquez's camp is based in the state while Rothwell trains in Wisconsin and Iowa.

"Ever since I found out I was going to fight in LA, I've gotten a lot of support from the fans," Velasquez said. "I just feel welcomed when I went over there at the press conference. I expect a lot of people to be behind me."

"For this fight I've can already pre-umpped the boos coming out," Rothwell said. "Cain's going to have a big following being there and there's nothing I can do about that. That all changes with the fight."