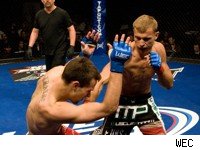 FanHouse has WEC results of WEC 43 featuring Donald Cerrone vs. Ben Henderson for the interim lightweight title at the AT&T Center in San Antonio, Texas.

The two friends will do battle for the opportunity to take on Jamie Varner at WEC 45 in December to unify the belts.