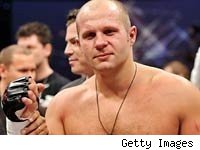 With the promotion's debut on CBS just under a month away, Strikeforce announced Friday the four matchups that will take place on the Fedor Emelianenko vs. Brett Rogers card at the Sears Centre Arena in Hoffman Estates, Ill.

"We're looking forward to delivering an explosive night of world class MMA action on CBS," Strikeforce CEO Scott Coker said in a statement. "We have the world's No. 1 fighter, Fedor, making his network primetime debut against an undefeated powerhouse in Brett Rogers and, with the stars lined up for the remainder of the card, it is bound to be an exciting night of television."

The new bouts added were Fabricio Werdum vs. Antonio Silva and Mousasi's opponent as Rameau Thierry Sokoudjou. The bouts are pending the approval of the Illinois State Commission.