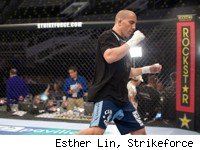 Strikeforce will run shows back-to-back shows for the first time, starting with Strikeforce Challengers on Nov. 6 at the SaveMart Center in Fresno, Calif. and followed by Fedor Emelianenko vs. Brett Roger on Nov. 7 in Hoffman Estates, Ill.

FanHouse has learned that in addition to the previously announced Jorge Gurgel vs. Billy Evangelista main event, Luke Rockhold vs. Jesse Taylor and Shane Del Rosario vs. Brandon Cash have been signed for the card.

The main card of Strikeforce Challengers airs live on Showtime at 11:00 pm ET and the following evening Strikeforce will debut live on CBS at 9 pm ET.