Sokoudjou vs. Gegard Mousasi Planned For Strikeforce Show on CBS 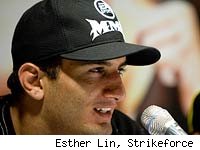 A fight between Rameau Thierry Sokoudjou and Gegard Mousasi failed to materialize in the Dream Super Hulk Tournament in Japan, but it is now expected to take place in Illinois and be broadcast by CBS as part of the Nov. 7 Strikeforce/M-1 Global card.

FanHouse has learned that Strikeforce has submitted the Sokoudjou-Mousasi fight to Illinois' athletic commission, and pending approval, the fight will take place on the undercard of the Fedor Emelianenko vs. Brett Rogers show.

Strikeforce has also submitted a heavyweight fight between Fabricio Werdum and Antonio "Bigfoot" Silva for approval to the Illinois commission. That fight could be a little trickier to get commission approval because it would be Silva's first fight in the United States since his suspension in California for failing a steroid test in July 2008, but Werdum-Silva is expected to be approved as well.

In addition to Fedor-Rogers, Sokoudjou-Mousasi and Werdum-Silva, a middleweight title fight between Jake Shields and Jason "Mayhem" Miller is scheduled for the CBS broadcast.