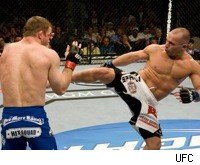 If you're wondering why Matt Serra hasn't been booked to fight since his UFC 98 clash against rival Matt Hughes in May, it's not because he's been injured or taking the loss too hard. No, Serra has simply been busy working on his new 8,300 square foot MMA gym that will be opening soon.

But once that business is taken care of, Serra will refocus his attention on his climb back up the welterweight ladder. His new road to the title begins in Las Vegas on Feb. 6, as Serra said he has verbally agreed to compete on the yet-to-be announced card.

And while FanHouse has learned that Frank Trigg is one of the leading candidates to face Serra in February, he would not confirm nor deny that "Twinkle Toes" will be his next opponent.

Regardless, Serra, who has only competed twice since his career-defining title victory over Georges St-Pierre in April 2007, said he would like to fight more than once in 2010.

He says he treats every fight at this point like it could be his last because, "You never know what could happen with injuries," but is quick to point out that he felt "phenomenal" leading up to the Hughes fight, and still thinks he can be a major factor in the UFC's welterweight division.

"I did everything right leading up to that fight, and that's what I will do for the rest of my fights. Everything down to my diet was excellent and the training was very smart. I had a great training camp, and that combined with my experience of being in there, I feel right at home."

Serra doesn't think he will ever get another shot at Hughes, but admits he would love another opportunity to show the world that he deserved to win at UFC 98.

"I haven't mentioned anything about the guy publicly. I know he wants to move on. I would love a rematch because I don't think it's really settled."

Some fans criticized both fighters for hugging immediately after the fight. How could they just squash everything seconds after it ended, they said. But Serra says that was simply two former champions showing each other respect after a 15-minute war. Nothing more.

"The second it was over, he said to me, 'That's going to be a close one to judge,' or something like that, and I told him, 'Good job. Don't sweat it. No matter which way it goes, it's over.' That's when we kind of gave a hug and raised each other's hands. And that's the right thing to do. I think that's the right example to set, and I think that, as a man, you had it out, and that's the right way to handle things. That's why even though I'm sitting here saying I want a rematch, I'm not calling the guy names and going the route I went before we fought, because again, I think there should be some respect after you fight somebody."

Serra says he doesn't have any dream matches in mind, but would love to fight at least once in New York. He has worked hard to get the sport legalized in the Empire State, and is still holding out hope that he will be actively competing once MMA is legalized in New York.

He'll have to wait at least another year to realize that dream. For now, it's all about his upcoming fight in February and his return to the 170-pound limelight.

"I just want fights that will be fun for me and fun for everybody involved, especially the fans."

For more on Serra's new gym, check out his official Web site, MattSerra.net, and be sure to check out his new Round 5 MMA figurine.