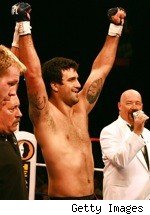 On this week's edition of The MMA Hour, we were joined in studio by heavyweight rising star Rolles Gracie Jr. The 31-year-old is the biggest Gracie to compete in MMA, and most recently improved to 3-0 when he defeated Peter Graham at Art of War 14 last month. Gracie talked about where he will fight next and living up to his famous last name.

Later in the show, we spoke to WEC lightweight champion Jamie Varner about Saturday's interim title fight between Donald Cerrone and Benson Henderson, as well as his road to recovery. Watch or listen to the show below.

[Download the MP3 or video directly from our feed]