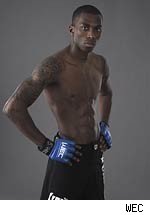 Anthony Njokuani was born in Nigeria in 1980, but all he knows about it is what his parents told him: That both his mom and his dad lost relatives in civil war, and that although they hated to leave their country, they moved to the United States in 1983 because they wanted to give their children a better life.

"My parents loved Nigeria," Njokuani says. "But they had to leave because of the war. My mom and dad both lost brothers and sisters."

And so at age 3, Njokuani, his parents and his siblings moved to Dallas. Now a professional mixed martial artist who will fight Muhsin Corbbrey in Saturday's World Extreme Cagefighting event in San Antonio, Njokuani says it was the upbringing he had in Texas that turned him into a fighter.

"I was getting into fights all the time," Njokuani says of his childhood. "People weren't very tolerant. They weren't accepting of someone from another country, another culture. I had to deal with people putting me down, the way I acted, the way my parents acted, the way my parents dressed me. My parents didn't dress us like other kids were dressed. My parents made me wear slacks and dress shirts and dress shoes to school, and my sister wore evening gowns. Kids laughed, and I turned into an angry kid because of all that. I had a bad attitude, and if people said anything to me I'd jump on top of them. I was always getting into fights."

That background is what made Njokuani a fighter, but it was something very different that made him a martial artist.

"I started getting into martial arts when I was 17 because I had been really into breakdancing," Njokuani says. "When I first took a taekwondo class it was because I thought it would be good for my breakdancing, to learn some of those high kicks."

"I had seen Bloodsport and Kickboxer and all those movies, and that made me want to learn about kickboxing," Njokuani says. "I had seen a couple of UFC fights at the time, but back then mixed martial arts wasn't quite as advanced a sport. I actually was more interested in becoming a K-1 kickboxer and my martial arts teacher thought I had the talent to do that. I wanted to be in K-1, but that dream never happened. But with MMA growing, I saw that there were a lot of opportunities in MMA, and so I made that my new dream. I ended my professional kickboxing career with a 22-0 record, and all my focus is on MMA now."

Making a career out of MMA isn't easy, and unlike his perfect record in kickboxing, he has suffered a couple of losses in MMA. But Njokuani, whose MMA record is 10-2, says he has good role models who showed him how to work toward a goal.

"We were poor, but my parents worked their way up to being middle class," Njokuani says. "My dad took jobs working in warehouses, and he would leave first thing in the morning and wouldn't come home until midnight or 1 in the morning. My mom took jobs at McDonalds, and they worked every single day until they had saved up enough money to start their own restaurant."

Njokuani says that while his mom hated it when he got into fights as a child, it now fills her with pride to see him fighting inside a cage in front of thousands of people.

"My mom loves it," he says. "She says whatever I want to do in life I should do. She gets nervous about my fights but she also loves watching them. I want her to see me become the lightweight champion. Winning my next fight is just another step toward that."

Njokuani's father died four years ago, and the whole family went to Nigeria to bury him there. It was Anthony's first time back to the land of his birth.

"It was an awesome experience," he says. "I got to see so many family members for the first time, and I got to see Nigeria. Nigeria is a beautiful place. It was not what I expected. I thought I'd see a lot of craziness, but when I stepped off the plane into the airport, I felt like I hadn't even left the United States: It was just like any American airport. In the cities they have shopping malls and people driving nice cars. That was not what I expected. My mom took me to the place where she was born and she said it was totally different. She said Nigeria had grown a lot since she had last been there."

Njokuani says he that when he fights on Saturday night in Texas, he'll be happy to fight in front of friends and family in his adopted home state, but he'll always feel a special kinship to the place where he was born.