Junie Browning of 'The Ultimate Fighter' Arrested, Charged With Assault 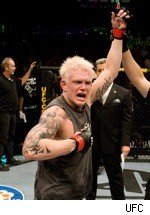 Junie Browning, whose antics on the UFC reality show The Ultimate Fighter made him one of the bad boys of mixed martial arts, was reportedly arrested in Nevada and charged with assaulting three nurses who were treating him for a drug overdose.

Lawrence Mower of the Las Vegas Review-Journal reports that the 24-year-old Browning was at the hospital because he "took 16 pills of Klonopin, an anti-anxiety drug, in an attempt to harm himself." Citing the arrest report, the Review-Journal reports that Browning is accused of pushing a female nurse, punching a male nurse and kicking another male nurse, and yelling, "Do you know who I am? I will kill you and rape your family."

Browning was portrayed on The Ultimate Fighter in 2008 as a drunken lout who picked fights outside the Octagon, and the UFC and Spike TV were criticized in some circles for tolerating his antics. But Browning has said since then that he has changed his ways and devoted himself completely to his training.

In two UFC fights since leaving The Ultimate Fighter house, Browning has gone 1-1. His last fight was a loss to Cole Miller on April 1, and he did not have another fight scheduled.

Update: According to Yahoo! Sports' Kevin Iole, the UFC has decided to release Browning following the incident.