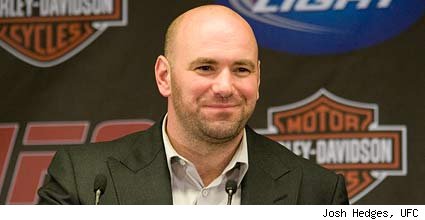 In a wide-ranging interview on ESPN's Jim Rome Is Burning, UFC President Dana White talked about why Kimbo Slice is in the UFC, why Fedor Emelianenko could still end up in the Octagon and why Herschel Walker never will -- and he said a fight between middleweight champion Anderson Silva and light heavyweight champion Lyoto Machida could happen in 2010.

Although Silva and Machida are friends who say they won't fight each other, White reiterated when pressed by Jim Rome that he thinks a Silva vs. Machida light heavyweight mega-fight could be close to happening.

"Anderson Silva is two fights away from cleaning out his entire division, and he's had two fights at 205 pounds where he's looked absolutely phenomenal -- he's actually looked better at 205 than he did at 185," White said. "I think we're probably a couple fights away from a mega-fight like that."

Other comments from White's Jim Rome is Burning appearance included:

On Rampage Jackson: "We're both mad, but the reality is he made a commitment. Now he's saying 'Dana talked me into being on The Ultimate Fighter.' He's right. I did talk him into coaching on The Ultimate Fighter. But he expected, and at the end of the show you're supposed to fight. He's supposed to fight now and he's not keeping his end of the deal. I'm upset about it."

On Kimbo: "The one thing about Kimbo that I really respect is this guy could have done a million different freak show things. ... He probably could have made a lot more money up front, but this guy came on The Ultimate Fighter, took my challenge, and is legitimately trying to become a mixed martial artist."

On Fedor: "Fedor's not afraid to come over and fight or do any of that stuff. He's got nutty managers. These guys are from Russia, coming to America trying to strong-arm us into some deal we won't want to do. Go do that to the butcher down the street in Russia. It doesn't work over here in the United States. If this guy wants to come put himself up against the best in the world he'll eventually make it to the UFC."