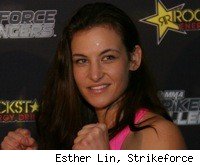 Almost five months after suffering the second loss of her professional career, Miesha Tate got back on track at a local MMA show on Saturday night. The 7-2 fighter defeated Sarah Oriza in the main event of a CageSport MMA card in Tacoma, Wash., and while it wasn't the toughest fight of her career, she'll always remember the victory for one simple reason:

"It's my first knockout victory, and it feels really good. I'm really excited about it," Tate told Fanhouse on Monday.

Tate knocked out Oriza with a head kick in the second round, and she believes this victory will help prove that she is more than just a one-dimensional fighter.

"I've been saying for a long time that I'm more than just a wrestler or a grappler," she said. "I'm a well-rounded fighter; I'm a freestyle fighter. I've been working on my stand up a lot. I did a three-week training camp down at AKA in San Jose and Cung Le's and I also went up to Urijah Faber's and got to work with all world-class stand up coaches. It's done wonders for my stand-up game."

Tate is planning on moving from her hometown of Tacoma to Northern California soon to train at the American Kickboxing Academy, Cung Le's Universal Strength Headquarters and Urijah Faber's Ultimate Fitness gym. Her boyfriend, Bryan Caraway, who also picked up a victory on Saturday's CageSport MMA card, will be moving with her, as well.

"I like fighting on the same card (as Bryan) -- I don't mind it all. We just kind of have to focus on ourselves, but there's a lot of other people around us that give us, individually, the attention we need and warm us up. Our teammates are always there to support us, and there's kind of that exciting feeling where I'm getting ready in the back and I know I get to watch him fight, or vice versa. All three times that we've fought together we've came out victorious, so I guess we always get to go celebrate, and have a good night afterward and feel really good."

Tate hopes to fight for Strikeforce again in December. She last competed for the organization in May, losing a unanimous decision to undefeated Sarah Kaufman. She is open to fighting anyone next, but in a perfect world, wouldn't mind avenging the only other loss on her resume.

"I would like to rematch Kaitlin [Young], of course. I wouldn't mind fighting Liz Posener. Whoever Strikeforce has in mind for me. They've got a lot of really tough top 135-pound girls that I would be eager to fight at any time. I'm ready to go. I'm ready to fight tomorrow if I could."

Strikeforce CEO Scott Coker recently said that the organization will hold a 135-pound women's tournament to crown its inaugural champion for that weight class, but Tate says she knows nothing more about it at this point. She was originally supposed to fight Kim Couture in May, but Couture pulled out of the fight due to personal reasons. And while she would be open to fighting Couture in the future, Tate says she is ready to face the best 135-pound fighters Strikeforce has to offer.

"I'm just kind of over (a fight against Couture); I don't really care at this point. I think that there's other people that would be more challenging and more what I'm looking for in a fight. But if that opportunity does come my way, I would gladly take it."

Tate has two fights left on her Strikeforce contract, which expires in May 2010. She also hopes to defend her 135-pound Freestylye Cage Fighting title in January.