War Machine Is Fed Up With Life in US 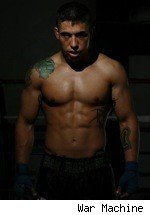 Since getting released from the UFC in May 2008, War Machine (10-2) has won five fights in a row, most recently defeating Mikey Gomez via third-round TKO in September. On Thursday, the fighter born Jon Koppenhaver will face David Mitchell (7-0) at the debut event for Tachi Palace Fights at the Tachi Palace Hotel & Casino in Lemoore, Calif., once the home of World Extreme Cagefighting and Palace Fighting Championship.

War Machine has never been one to bite his tongue, and when FanHouse spoke to him on Monday about his career and life outside the gym, he certainly didn't hold back. The full interview is below.

Ariel Helwani: What do you know about your opponent on Thursday?
War Machine: I know that he's 7-0. I don't know how, because he sucks. That's pretty much all I know.

Why do you think he sucks?
He has no stand up, no wrestling, he pulls guard ... I don't know. He sucks.

So you're not expecting a tough fight from him?
Nah. I think it's kind of a joke fight.

Are you even motivated to fight him?
I'm always motivated to make money, but it's just about money. That's why I fight in the first place. I don't think he is a real fight for me.

You're now 5-0 since you left the UFC. Do you feel as though there are enough interesting fights available for you outside of that organization?
Yeah, there's guys out there, but he's not one of them. He's just one of those guys who's there for me to get another pay check. But I mean, there's other guys out there who aren't in the UFC that are tough guys; guys who can even beat me. But not him.

Do you think we will see you fight for any of the larger organizations soon?
Strikeforce, actually, I might fight there. I'm in negotiations to fight there in November, but it's still up in the air.

Would that be on one of their Challengers shows?
Yeah.

Have they offered you an opponent?
There are a couple in the air right now -- I don't know if I'm allowed to say yet -- but nothing is confirmed. We're trying to figure all that out right now.

Would you like to fight for Strikeforce?
Oh, for sure, man. It would be a chance to get back on TV, make more money and get more exposure. At the end of the day, that's what it's all about. It's all about feeding yourself, so it's good for me. Hopefully that comes through.

Is there anyone out there that you would really like to fight right now?
I don't know, man. I used to have guys that I thought about that way, but after being in the game so long, and I've met most of the guys, and I've trained with most of the guys, it's kind of just ... I don't hate anybody. It's kind of just business. It's different now. I don't have any dream match.

How are you feeling out of the gym? Do you feel at peace with your life right now?
No, never. I think that, eventually, I'm going to have to move out of the country because I don't think I will be able to survive in the United States too much longer before going to jail.

Why?
Because I don't think there's nothing wrong with beating somebody up. I think a lot of guys just need to get beat up. A lot of guys, they act like idiots when they're out and they need to get beat up. I don't think there's nothing wrong with that. Unfortunately, in this country, when you beat somebody up, you get arrested, and it's too hard for me to follow the rules, man. One day, hopefully, I can leave the country and live somewhere so I can be more free.

Don't you think you would run into the same problems anywhere else in the world?
Yeah, but if I beat them up, nothing would happen about it.

You don't think so?
In almost any other country you get into a fight, nothing happens. It's not a big deal; it's not like you are killing somebody. It shouldn't be against the law to fight. Back in the day, in America, you could fight and nothing would happen. The cops came and break it up. There's a lot of countries, I know for a fact, you get into a fight and nothing happens. They break it up and you go your separate way; it's not a big deal. You know, sometimes people, they need to get beat up. That's their fault for acting stupid. I think, definitely, they'll be idiots in other countries, but if I beat them up, nothing happens.

Don't you feel like you're able to release that aggression in training or in a fight, so that you won't feel the need to fight in public?
Not at all. To me, fighting is a sport. Training is something I do because I enjoy it. Basically, I fight because I don't want to work -- that's why I fight. It doesn't do anything for me with relieving stress; it doesn't do anything for me for relieving anger. There's no anger. I'm going to fight somebody on Thursday who I have never met in my life. I don't hate him. If I beat him up, I beat him up. It's just a sport. Afterward, we can get drunk, you know what I mean? No aggression is released -- it does nothing for me. It's a totally, totally different feeling from a real fight.

Do you enjoy getting into these fights?
Of course. I'm a real fighter. There's a lot of guys out there that are dorks, and their whole life they learn, train hard jiu-jitsu, they learn boxing, and they become tough in the ring. But I was in kindergarten fighting. I was in first grade fighting, second grade, sixth grade; always fighting. I'm a real fighter -- big difference. It's something in my blood, it's not a conscious decision. People are different, and that's the way I am.

Where would you want to live?
Sh**, maybe the Philippines, because I have a connection there. Maybe Brazil. I don't know, there's a lot of places, man, where you can go. Even Ireland -- my friend's from Ireland -- he says you can get into a fight all the time and nothing happens. It shouldn't be a big deal to get into a fight, it shouldn't. I don't understand it; this country's gay. It's definitely one of the worst countries in the world to live in, I think.

So, would you like to be a full-time street fighter like Kimbo Slice once was, or would you just rather not have to worry about any repercussions should you ever get into a fight?
Exactly. Even Kimbo Slice, he got paid, but he didn't hate those guys. It was just like he is doing now. I want to do it where I can go out, look for chicks, have fun with my friends. I don't want to look for a fight ever, but if someone acts stupid, I want to be able to smash them. I don't want no one calling the cops, I don't want no one coming to their rescue, or no one suing me. I want to be able to teach them a lesson and the next time they go out, they will shut up, you know what I mean? I don't want to look for trouble, but if something happens ... for example, if something happens right now in public in the United States, I have to pretty much run. If somebody slaps me or spits in my face, I have to turn around like a girl and run. Otherwise, what's going to happen? I'm going to beat him up and go to jail. Why is that OK? If I'm with my girlfriend at a bar, and somebody grabs her t*** and pulls them out, and I beat the crap out of them, I'm the one who is going to go to jail? Why? That's not fair. This country is retarded. I can't handle that. I can't abide by those rules. There's no way.

Does that sort of thing seem to happen to you a lot?
No one ever picks on me knowing who I am, but you know when you're out, there's normal, random, drunk idiots when you're out at a bar. You know, they walk by and they slap your girl on the butt, they walk by and say something obnoxious or they walk by and they bump into you because they think they're tough. You know, things happen like that all the time to normal people. And when normal people get into a fight, nothing happens; they just leave. But with me, some guy goes, 'Oh, that was War Machine,' and next thing you know the cops are at my house. It's not fair. If someone is going to act like a jerk, they'll get beat up. And I don't think there's anything wrong with that.

Are you still motivated to be the best MMA fighter you can be?
Yeah, I'm not going to ever get a day job any time soon, so unless I win the lottery, I'm still going to be fighting. Even if I did win the lottery and I had 20 million dollars, I would still train every day. I would train because I like to learn and I like to be better than everybody else. I want to be able, in any circumstance, to be able to smash whoever needs to be smashed regardless of if I want to fight professionally or not. Unless I win the lottery any time soon, then I'm going to keep fighting because that's a way for me to keep a roof over my head and for me to eat. It's a job.