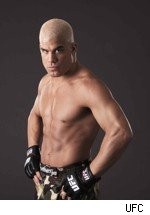 Tito Ortiz suggested on Twitter Monday night that his scheduled UFC 106 fight with Mark Coleman is off because Coleman pulled out, adding that he still plans to fight on the Nov. 21 card and the UFC will find a replacement opponent for him soon.


That followed a similar tweet in which Ortiz misspelled "Coleman," but whatever the spelling, the message is clear: Ortiz says the Coleman fight is off but that he'll still be fight someone at UFC 106.

So who will Ortiz fight? Michael Rome of Bloody Elbow suggests that it could be Rashad Evans. That would be a big draw for the UFC and a fight that would make sense because Evans and Ortiz previously fought to a draw, but I don't see it happening. I think Ortiz would balk because he wants an easier opponent than Evans, and I think Evans would be reluctant to take any fight on less than seven weeks' notice.

I've also heard the name Forrest Griffin tossed around, which makes sense because the two previously fought to a split decision, but I see the same problem with Griffin that I see with Evans: I don't think Ortiz wants to fight an opponent as tough as Griffin, and I don't think Griffin wants to fight next month.

I think Houston Alexander would make a lot of sense because he has some name value (though not as much as Coleman) and because Ortiz would view Alexander as the kind of tune-up opponent he wants to fight. Stephan Bonnar, who lost to Coleman at UFC 100, would also fit that mold.

The UFC has a good enough light heavyweight division that you can bet they'll find someone worthy of fighting Ortiz in the co-main event at UFC 106, but with just six and a half weeks to go, Joe Silva will need to act fast.