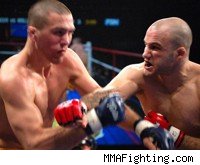 Mark Miller, Deray Davis, Christian "Xaropinho" Uflacker and Jonatas Novaes have all signed with Strikeforce and will make their debuts at the Nov. 7 Fedor vs. Rogers event in Hoffman Estates, Ill.

FanHouse has learned from sources close to the fighters that IFL veteran Miller will be facing former Bellator competitor Davis, and Uflacker will meet Novaes in a battle of Brazilian Jiu-Jitsu black belts on the undercard of the CBS-televised event.

Miller (10-4), who was last seen as a contestant on The Ultimate Fighter 9, will look to snap a two-fight losing streak from 2008 when he fought current UFC fighter Mike Pierce and Strikeforce title contender Jay Hieron. Miller's biggest win was a 54-second knockout over Josh Neer at an IFL event in 2007.

Davis (5-1-1) made a name for himself locally through the Corral Combat Classic promotion in Indiana. He won on a ShoXC card last October and strung together two additional wins before falling to Jesse Juarez at Bellator 6 in May.

The 27-year-old Novaes (4-2) is also a grappling expert from Brazil. Novaes was undefeated in 2008, winning all three fights via submission, including two first-round submissions in one night at a Next Generation Tournament card in Italy.

Here's how the Nov. 7 Strikeforce card is shaping up.