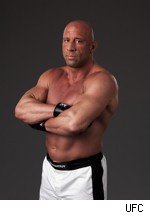 Mark Coleman has been forced out of a scheduled bout against Tito Ortiz at the Nov. 21 UFC 106 event in Las Vegas due to a second-degree tear in his ACL.

FanHouse has confirmed the injury with Coleman's long-time friend Michael DiSabato, who also responded to Ortiz for a Twitter post Monday night stating that Coleman "sissie[d] out."

"Coleman does not match make -- he fights -- Tito calls him 'sissy' -- quote me ... only thing Coleman scared of when it comes to Tito is contracting Swine flu from his dirty [bum]," DiSabato told FanHouse.

"We all know where he lays his head at night," he continued. "Please, Coleman is Hall of Famer and does not run from anyone. Ask Tito why he can't wait till Jan. 2. Coleman will be ready to fight on the New Year's show."

According to Ortiz's tweet, he still plans on competing at UFC 106. Ortiz made peace with UFC president Dana White and signed in July to come back to the UFC. He's been inactive while healing from a back surgery. Coleman, 44, is coming off a unanimous decision win over Stephan Bonnar at UFC 100 in July.