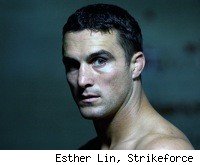 Roberts also said that the hard-hitting Smith will be competing on the yet-to-be announced December Strikeforce event on Showtime. As of Monday, no official date or venue has been announced, but MMA Junkie reported on Monday that the organization has a Dec. 5 and Dec. 12 date secured with the California State Athletic Commission for a show at the HP Pavilion in San Jose, Calif.

If Strikeforce runs a show on either date, they would be going head-to-head with a live UFC event for the first time since signing their new deal with Showtime in February. On Dec. 5, the UFC will air the Finale of The Ultimate Fighter 10 on Spike TV and UFC 107, headlined by BJ Penn vs. Diego Sanchez for the UFC lightweight title, airs live on pay-per-view on Dec. 12.

Smith lost via rear naked choke submission to Nick Diaz in his most recent fight in June. Prior to the loss, he had won his first two Strikeforce fights against Terry Martin and Benji Radach.

Roberts would not comment on who Smith might be facing, but said Smith was interested in fighting Frank Shamrock or in a rematch against Radach. Radach filed a formal appeal with the CSAC after the Smith bout because he thought the referee stopped the fight too early, but lost.

Smith has openly talked about fighting "The Legend" ever since Shamrock criticized his appearance on an EliteXC broadcast.

No fights have been officially announced for Strikeforce's December card.