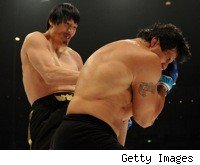 NBA star Shaquille O'Neal has said on numerous occasions that he would like to fight 7-foot-2 Korean fighter Hong Man Choi in an MMA match when his basketball career ends. The four-time champion even appears to be somewhat serious about this challenge, as videos of him training MMA have popped up on the Internet as of late.

When FanHouse contacted Choi, who is scheduled to face Ikuhisa Minowa in the DREAM Super Hulk Tournament semifinals on Tuesday in Japan, about fighting O'Neal at some point in the future, he simply responded via e-mail, "Yes, if there is a chance."

Something tells me there's a chance.

It's safe to say that the good folks at Fighting and Entertainment Group, DREAM's parent company, would love nothing more than to book this fight. Just look at what they've done with Choi recently: in May 2007, they matched him up with former baseball player Jose Canseco and "Techno Goliath" will outweigh Minowa by 126 pounds when they meet in Tuesday's semifinal bout. In some ways, a fight against O'Neal would be the most logical MMA fight Choi has ever been a part of.

Asked whether he believed O'Neal had a chance against him, Choi, who was a man of few words in our interview, responded, "No."

Choi is 2-2 in his MMA career. Other than his one-sided victory over Canseco, his only other MMA win was a 16-second first round knockout of Bobby Ologun, a Japanese TV personality, in December 2006. His two losses have come against Fedor Emelianenko and Mirko Cro Cop.

In June 2008, he had a brain tumor removed, which many believed would end his fighting career. However, Choi said his health continues to improve.

"My condition is about 80% right now, but it is getting better," Choi said. "Although my condition is not perfect, I will do my best for each fights."

The 28-year-old added that he plans on splitting the rest of his career between K-1 and MMA, but it's unlikely that anyone will ever take him as a serious MMA fighter. That's why he needs fights against the likes of "The Big Aristotle" to keep his career going. And now that we know both men are into the idea (what a surprise, I know), it could be only a matter of time before the freakiest of freak shows bouts takes place at the Saitama Super Arena.

In case you missed it, below is a video of O'Neal challenging Choi to an MMA fight: