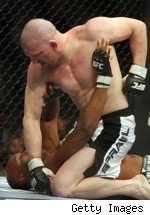 Lutter, arguably most discussed for presenting UFC champion Anderson Silva his toughest challenge in the UFC, spent the majority of the first two rounds on top of MacDonald. But besides choke attempts, Lutter hesitated in striking MacDonald on the ground.

"I just felt like he was always on the verge on getting away," said Lutter. "I need to go home and drill in that position."

Still, Lutter was able to score a takedown and attempt a rear-naked choke in each of the two rounds.

"Once he gets you there it's very hard to get out of there," MacDonald said. "He's world class on the ground."

MacDonald won the third round by putting the weary Lutter down to work ground and pound punches. But it was too late and ultimately lost on all the scorecards 28-29.

MFC lightweight champion Antonio McKee told FanHouse coming into the fight that he would shed his reputation of going to decisions by taking the chance to stand and strike with opponent Carlo Prater.

It only took 30 seconds for McKee to revert to what he does best: wrestle. McKee shot in and rained down punches to cut open Prater. Things went the same way through all three rounds and McKee won the unanimous decision – his 18th career decision win.

"I'm disappointed in myself cause I really would have like to have ended this fight with a submission or a knockout," McKee said. "So I would like to apologize to the fans in Canada. I got to keep training hard and get more comfortable or the next couple of fights I might have to hang it up."

Luigi Fioravanti was the one recognized for having heavy hands, but Xtreme Couture's John Alessio demonstrated his punching power too, knocking out Fioravanti with a right hand at 1:34 of the third round. Alessio wasn't gunning for the knockout for the majority of the fight though, as he spend much of the fight punching and then backing off to avoid Fioravanti's counterpunches.

"The gameplan was to go in there and kill him with footwork," Alessio said. "Try to move around – he still landed some big shots on me. He took me into deep water until I landed that knockout."

Alessio actually landed the knockout with his head down and swinging a one-two combo. It wasn't necessarily pretty but it worked out for him and Alessio improved to 26-13 and could be headed towards a shot at Pat Healy's welterweight belt.
The Ultimate Fighter 3's Mike Nickels tapped out David Heath in a wild and nonsensical slugfest. Health had no respect for Nickels' punching power the entire time, leaving his hands by his waist, and at one point in the third around stood as a punching bag with his hands down to give Nickels eight free punches. With less than 90 seconds left in the round, the two began to grapple and the Brazilian Jiu Jitsu brown belt Nickels applied the rear-naked choke for the submission win at 4:02.

According to CompuStrike, Nickels threw 265 punches and landed 129.

The Ultimate Fighter 8 contestant Ryan Jimmo notched his eleventh straight win with a split decision over full-time corrections officer Marvin Eastman. It was a close fight spent primarily in clinch and Jimmo was awarded the decision for landing more strikes in clinch. Jimmo scored a takedown in the second round only to be reversed, and Eastman earned his takedown in third with a body lock throw into Jimmo's halfguard.

Pete Spratt finally won one in Canada, knocking out local up-and-comer Nathan Gunn at 4:19 of the second round.

Spratt's weakness in grappling remained well apparent, giving up his back several times and being taken down four times. But Spratt has always been known for his striking and when he's able to keep the fight standing that's where he is dangerous.

The first round belonged to Gunn with his wrestling and ground control. In the second, Spratt was able to connect, first rocking Gunn with a right hook and then following with a combination of punches in an attempt to finish. Gunn weathered the storm and brought the fight to the floor. But once Spratt escaped to his feet, all he needed was a wild uppercut to flatten Gunn face first onto the mat.

Spratt improved to 20-15, snapping a two-fight losing streak, while the Gunn loses for the first time in his career after seven straight wins.