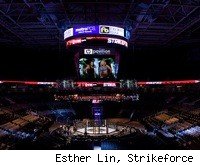 Strikeforce took another big step towards becoming an established MMA promotion on Saturday when the San Jose-based organization announced that they have appointed Rich Chou to be their first official matchmaker. According to a press release issued by the organization, Chou will assume the position immediately.

"It is an honor to have the opportunity to work for a top organization like Strikeforce," Chou said via press release.

"Strikeforce has done some incredible things over the course of the last few years to emerge as one of the world's premiere MMA promotions. They have a deep roster of world class talent so it's going to be very exciting and a lot of fun to be able to put together highly compelling matchups for their events."

Chou has been around MMA for 10 years. A graduate of Pepperdine University, he has one professional MMA fight on his resume: a 2002 unanimous decision loss to Nick Bradley. Chou has also competed in several grappling tournaments and refereed over 100 MMA bouts in Hawaii, according to the release.

In 2004, Chou was hired to work behind-the-scenes and as matchmaker for the Hawaiian-based Rumble on the Rock, and held a similar position with EliteXC between 2007 and 2008.

While this announcement won't dominate headlines like, say, Strikeforce's recent signing of Fedor Emelianenko, make no mistake about it: this is an important milestone for the young promotion. Having Cook, and before him, Javier Mendez, another AKA instructor, work as matchmaker with Coker was a major conflict of interest for obvious reasons.

Now, Strikeforce has hired a well-respected member of the MMA community, who will solely concentrate on putting the best fights together for the organization on Showtime and CBS. It's a move that was long overdue for Strikeforce, and one that should pay off immediately.