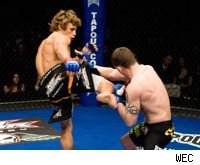 Pay-per-views and a reality television show are still in the plans for the WEC to further its viability as the lighter weight version of the UFC.

WEC general Reed Harris said Thursday that the WEC is actively looking to enter the pay-per-view market in 2010, but when will all depend on how effective it is in the near future when it comes to building anticipated fights through its free telecasts on Versus.

"What we know as a company is that we need to have very compelling fights in order to have a successful pay-per-view and that's what we're working towards on our free TV side," Harris said. "We're going to be providing fights in the next few months that will be compelling and also make sense as far as who is in line to fight the best in the WEC and once we determine that then we will have those guys on pay-per-view and fight it out."

The WEC currently has three events planned past next week's WEC 43 event, headlined by an interim lightweight title bout between Donald Cerrone and Ben Henderson. WEC 44 in November will feature Mike Brown defending his featherweight belt against Jose Aldo and WEC 45 and 46 will happen in December and January, respectively. The plan for December is to have lightweight champ Jamie Varner take on the winner of Cerrone-Henderson to unify the lightweight belts.

One of the major reasons why the WEC is pursuing pay-per-view is the potential for a dramatic increase in revenue, which would in turn allow it to better compensate its fighters. The salaries for WEC athletes pale in comparison to the UFC and the WEC's biggest stars, Urijah Faber and Miguel Torres, have spoken out about wanting to earn UFC-type paydays.

Another model the WEC could be following the UFC in is a reality television show similar to The Ultimate Fighter that would help showcase new talent and draw added interest towards the organization.

"That model seems to have worked for the UFC pretty well, so it's definitely something we considered but we haven't made the decision what that type of show would be and the treatment of it," said WEC Vice President Peter Dropick.

The key for the WEC is to continuing pushing itself as the number one promotion for lighter weight fighters through its 135, 145, 155 and soon-to-be introduced 125-pound weight classes.

"I think we are well on our way to creating a very dynamic and deep weight classes that I think this coming year," Harris said. " We're going to have some breakout guys and breakout fights and hopefully we can get those fights on Versus and eventually build into some superfights on pay-per-view."