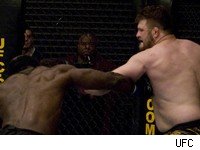 The ratings are in for Wednesday night's episode of The Ultimate Fighter: Heavyweights and Kimbo Slice now stakes claim to three of the top four most-watched MMA fights on US television.

The episode is the highest rated for an original program in the six-year history of Spike, breaking the previous record of 4.1 million viewers set during the season premiere two weeks ago.

Slice vs. Nelson is fourth on the all-time most-watched list. The number one spot belongs to Slice vs. James Thompson on CBS, followed by Tito Ortiz vs. Ken Shamrock 3 on Spike TV and Slice vs. Seth Petruzelli on CBS.