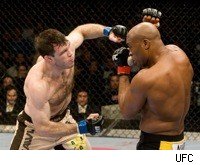 Forrest Griffin hasn't been heard from much since his UFC 101 loss to Anderson Silva, but that's not to say he hasn't been keeping himself busy. The former UFC light heavyweight champion recently got married, released a new iPhone app and has been working on his second book, not to mention planning his upcoming honeymoon.

FanHouse spoke to Griffin on Thursday about the big changes in his life and when he expects to return to action. The full interview is below.

Ariel Helwani: I heard you recently got married. Congratulations.
Forrest Griffin: I did. Thank you.

How does it feel?
It's good. So far, so good. It's been a whole week. We're actually trying to plan our honeymoon right now. We're going to go do a bunch of cool stuff.

I just downloaded your new iPhone app, and a lot of the material deals with dating, which makes me think it would make you more attractive to women right now. Kind of weird timing considering you just got married and all.
I don't know. You know, there's the old Alec Baldwin quote.

Which one?
The ring means at least one person can stand you and your d*** works.

Right. Well, I found some of your advice to be fascinating, but I'm curious if you always came across as a ladies man or do you just have more confidence now that you are taken?
Oh, no, no, no. There was definitely what I like to call some cold periods in my life.

So, you're trying to help out some of your other fans who are having trouble in that department?
I would almost like to think that I was the loser that realized his ways and then kind of decidedly made a purposeful change.

Kind of like the male version of the old ugly duckling story, right?
Well, yeah, except you don't really have to change much except for your attitude. Much easier.

Does not having to worry about dating make you a better fighter?
Oh yeah. The biggest thing for me is just somebody that is supportive of me and my lifestyle. Think about it in reality, if you're out chasing women, you're not doing what you should be doing. If you got something steady and stable, and you know, a person you could really trust and count on to have your back, it makes a big difference in life. It's the old stupid quote, 'Behind every good man is a better woman,' or something of that nature. 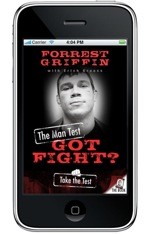 Are you humbled by the fact that you have an iPhone app, because if my research is correct, you're the only MMA fighter to have his own one?
That's awesome. You know, I'm not 100% sure what the hell the app is. All I did was read some stuff.

Have you ever seen it?
No. Is it out yet? I looked for it yesterday.

Yeah, I was just using it for a few minutes.
Wow. It's so popular that I couldn't even find it. Seriously, I was looking for it yesterday.

All I had to do was type in your name.
Wow. I didn't think of that. You're obviously a technological wizard, that's why you thought of that.

Well, I liked your narration at the beginning. Your delivery was very convincing and enthusiastic.
The complete lack thereof. (Mumbles narration with no enthusiasm). Yeah, that's another part of success. If you're not trying, you can't really fail.

So have you put your fighting career on hold for a bit to focus on your wedding and honeymoon?
No, I'm just trying to get married and stuff; it's kind of a big deal. I'm going to start training again Oct. 12 actually, when we get back.

Let's look back at your last fight against Silva at UFC 101. Ultimately, what do you think went wrong out there?
I don't know. I'm going to guess everything. You know where I made my biggest mistake was saying I would fight that guy. That's definitely the first mistake I made and the biggest.

What do you mean?
You know, because you make mistakes a lot and I have the want to go back and do everything perfect.

What do you make of the criticism you received after leaving the cage immediately after the fight was over?
That's dumb. Those people are idiots. Why? Nobody cares. I mean, I don't think the losers were going to speak that night anyway, you know. Just get on with the next fight already.

Did it bother you to hear people criticize your post-fight reaction?
Nah, that's the first time I've ever heard it. This is going to blow you away, but I haven't watched the fight or talked about it.

This guy actually asked me a good question the other day, and this is a real story and I really like it: first off, he was very confrontational; I didn't like him much to begin with, and he goes, 'Hey, man, I have to know,' because it's his business to know, 'why did you run out of the cage that night after the Silva fight?' And I said, 'Look, man, I haven't told anybody, let's keep this on the down low, but the truth is your mom was waiting for me in the back to suck my d***, and you know how good of a b*** j** your mom gives, so I didn't want to be late for that sh**.' And that's pretty much the answer I give. I like that answer, so I'll give that answer to everyone.

Was he a fan or media member?
I don't know. I bet he's not a fan anymore, but I tell ya, I'm a fan of his mom's b*** j***. That's the important thing, and that's what I want to come across in your story. If anybody asks me that question, that's my answer.

You know what blows me away, man? All these kids ... First of all, people always rail on me for cussing, but I'm actually a really good person. But I use a lot of profanity because I consider what I do to be kind of an adult thing. Not like adult nudity, but you know, just violence, whatever. And I get all these kids, really young children, asking me to sign my book. And I wonder, Did your parents look at this before they gave it to you? This is not really a book for children. Actually my next book starts with a ratings system. Have you noticed there's no rating system for books?

Like four stars or two thumbs up?
No, like parental guidelines like movies. What's up with that? I can just go rent any kind of book, you know?

Oh, right. More to that point, you recently did an interview with MMA:30, and it seems like people came away from it thinking you don't like being a role model. Is that accurate?
You see, this is why I hate the media, man. This is why I really don't like doing interviews; this is why I don't really keep up with the sport, honestly. You know, when I watch the fights, I watch them on mute, because I don't really care to hear what anybody has to say about them. That kind of annoys me. I'm a really good person. I'm a very good person, and I'm better than most. If there's a heaven, I gotta think I'm going there. ... I think I'm a good role model. Like, when I have kids, I think I will be a good role model. I mean, I live my life according to my own beliefs.

Are you still as passionate about your MMA career as you were before the Silva fight?
Well like anything, you're kind of jonesing to get back in the gym. I'm still a hyperactive kid, and if I go too long without getting good workouts in, I really feel like I'm bouncing off the walls like crazy, which is kind of like how I feel today.

Would you be interested in being a coach again on The Ultimate Fighter?
You know, the bottom line is I will do whatever the UFC wants me to do. They've really taken care of me and my career, thus far, so whatever direction they want me to go in, whoever they want me to fight, and that's genuine. I'm more preferential about where I fight than who I fight. I would really like to fight in, I don't know, Las Vegas. Or maybe, stretch, California, if I have to. I like to fight close to home, on my time zone, with the air that I'm used to, where I can control my food better. There's more fights overseas, and I understand I may have to fight overseas, but I put more into where I fight than whom I fight. I've never asked for anybody, well, except maybe 'Shogun,' actually. I almost think that you're kind of jinxing yourself. Like, I'm afraid to ask for opponents.

And the UFC hasn't talked to you about what's next yet?
No. You know, it's hard for me to think about a fight when I'm on vacation or my honeymoon, so I was kind of hoping they would leave me alone until around Oct. 12. You know, when you are actually doing something about your next fight.

Do you think you'll fight again in 2009?
You know, there's that Jan. 2 card that looks kind of appealing to me.

And it's in Las Vegas ...
Oh, there you go. Done deal. I didn't even know that, but now I really want to fight on that one.