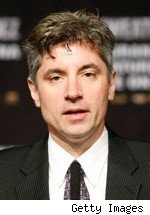 A day after the Kimbo Slice vs. Roy Nelson fight aired on The Ultimate Fighter, the victorious Nelson lashed out at referee Herb Dean, referring to Dean as "a retard" for failing to stop the fight when Nelson was raining punches down on Kimbo late in the first round.

Michael David Smith: Do you think Herb Dean handled the Kimbo Slice-Roy Nelson fight appropriately?
Keith Kizer: Definitely. I probably had the best seat in the house because it was right where I was sitting at the Commission table. It was quite an atmosphere, down at the Ultimate Fighter gym. There were probably 50 people down there, but it felt like a pay-per-view.

But as for the ending of the fight, it was right where I was sitting, and the first round was pretty close to getting stopped when the clapper sounded with 10 seconds left in the round, but it was definitely not a situation where he needed to stop the fight. (Kimbo) was lucky the round wasn't any longer than five minutes, but he got up and he was fine.

As far as the second round, (Nelson) got (Kimbo) down a lot earlier, and although Herb Dean gave him every opportunity to escape or fight back and he couldn't. That's no different than if a guy turtles up and isn't fighting, that's when you stop the fight, and Herb did. Very good job by him.
Roy Nelson said Herb Dean "was afraid to stop the fight because he was like, 'Am I going to get fired?'." Do you think there's any truth to that at all?
No, there's absolutely no truth to that. I don't know Mr. Nelson well, but these guys get paid to hype themselves. I've actually already seen today some people saying he should have stopped it in the first round, and other people saying he stopped it too soon in the second. Definitely not. I didn't see it on TV -- I don't usually watch the show -- but being there live, he stopped it when he should have stopped it.

I doubt Mr. Nelson is doing anything more than hyping himself. Some people have maybe criticized him for not doing more damange to Kimbo, and so he's saying Herb should have stopped the fight. And that's fine. He should be hyping himself. It's the same as the rematch between Brock Lesnar and Frank Mir, when they hyped that fight they showed Brock Lesnar so mad at Steve Mazagatti that he punched a door. They were selling a rematch. That's what they do. But I can tell you that Mr. Nelson has never complained to me about Mr. Dean and Mr. Lesnar has never complained to me about Mr. Mazagatti.They do it to hype themselves or hype the fight, and there's nothing wrong with that.

So you don't have a problem with that criticism? In other sports athletes can find themselves in a lot of trouble if they criticize referees.
Well, we're a little more limited. We're a government agency. Because of the First Amendment, you have more leeway criticizing the government than you do criticizing the NFL or the NBA if you're a player. We can't discipline a licensee just because of something they said. If someone were to say, "The referee did a horrible job," they're free to say that and they should be free to say that.

It's a different situation in the NFL where you're talking about a private employer. The UFC is a private business and if Mr. Nelson made a criticism of the UFC they could handle that internally with Mr. Nelson, but we don't discipline for something like that.

It sounds like you've heard feedback today both that Herb Dean stopped it too quickly and that he let it go too long.
Just on the Internet. I usually go to The Underground, MMA.tv, and I saw some of that feedback. I've also seen people saying he should have stood them up, which makes no sense. Maybe on TV you couldn't tell, but in person it was definitely a situation where I felt like Herb in the first round was watching it very closely, as a good ref. After the first round, Herb watched (Kimbo) very closely during the one minute rest, as did I, and then in the second round it was a similar situation and again Herb was watching it very closely and did stop it. I was quite pleased with both rounds.

Do you think fans understand a referee's decision-making process when deciding whether to stop a fight?
Not all fans, but many do. The most obvious example is when someone turtles up. if someone turles up and is not making any effort whatsoever, and is taking punch after punch, you've got to stop it. If a fighter is in a position where nothing can happen but him getting hurt, a guy's on the bottom and he's getting hit and hit and hit, you've got to stop the fight. Our refs are very experienced. When a guy is in a situation where he's not doing anything offensively, he's not improving his position, there's no way he can improve his position, he's not making any attempt to improve his position, and he's getting hit repeatedly, that's the time to stop the fight. I think Herb Dean stopped the fight at the right time.

From the Athletic Commission's perspective, is there any difference between how you handle Ultimate Fighter fights than any other MMA fight in Nevada?
Not really, but what does come into play sometimes is a fighter's experience. The more experienced a fighter is, the more likely he is to know when he's in trouble, to know when he needs to tap, to know certain escapes, so I think a referee can give a little more leeway to a more experienced fighter in that respect. The more experienced a guy is, the more chances he might have to get out of a certain hold and come back and win a fight.

Is there anything else you'd like to mention about The Ultimate Fighter?
I thought there were some amazing guys, with their size and athleticism, guys who were 260, 265 pounds with that athleticism, it was pretty good. For the fans I hope it'll show through on TV as well.

Did you attend all of the fights on this season's show?
I missed two or three when we had other fights on the same day, but that's part of my job: Go to all the fights and make sure they run smoothly, do the weigh-ins, that stuff. It's a good thing for the sport to have this show, and I think the quality of the fighting has been good.