Bobby Lashley in Talks With Strikeforce 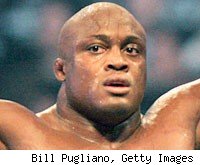 Bobby Lashley, the former WWE champion turned MMA fighter, is currently in talks with Strikeforce to compete for the San Jose-based organization, FanHouse has learned.

The MMA rookie hasn't fought since his June 27 victory over Bob Sapp on the Prize Fight Promotions "Ultimate Chaos" pay-per-view, and still has two fights left on his contract with that organization. However, talks have heated up over the last few weeks with Strikeforce about Lashley making his debut on the Nov. 7 CBS show, headlined by Fedor Emelianenko vs. Brett Rogers. As of Thursday morning, though, no deal has been signed.

Lashley was rumored to be facing Ron Waterman on a November Prize Fight MMA pay-per-view in Colorado. No word on who he would fight first should he sign with Strikeforce.

Lashley's manager and agent Greg Bloom would not confirm nor deny that any talks are taking place with Strikeforce and Strikeforce officials could not be reached for comment.

The 33-year-old two-time National Association of Intercollegiate Athletics wrestling champion has been spending most of his time working for Total Nonstop Action wrestling as of late, but Bloom says Lashley is as committed as ever to MMA.

"Bobby's will to fight has never gone away. He's been ready to fight since June 28. It's just getting the promoters to get their ducks in a row. Bobby Lashley is as committed to MMA as he's been since he stepped in the cage," Bloom said.

"He's always training; he's always in the gym; he's always ready to fight. Him being in TNA more than in MMA at this point has nothing to do with Bobby Lashley. We're just waiting for the promoters to let us know when and where."