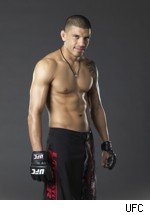 The UFC has found a new fight for The Ultimate Fighter 9 welterweight runner-up DaMarques Johnson and it will be against Edgar Garcia at UFC 107 on Dec. 12 in Memphis, Tenn.

Garcia confirmed Wednesday evening on his blog that he received a phone call Tuesday about the matchup and on Wednesday received the bout agreement.

Johnson (13-7) out of Jeremy Horn's Elite Performance in Salt Lake City, Utah will be fighting for the first time since his loss to James Wilks in the welterweight final of The Ultimate Fighter 9 season finale in June.

Garcia (7-1) suffered the first loss of his career on the same card, dropping a split decision in his UFC debut to Brad Blackburn. Garcia was brought over from the WEC for his knockout win over Hiromitsu Miura at WEC 38 in January.

Johnson had been preparing to fight Peter Sobotta at UFC 105 on Nov. 14, but according to MMAJunkie, Sobotta had to pull out due to military commitments

UFC 107 will be headlined by two lightweight bouts, BJ Penn vs. Diego Sanchez and Kenny Florian vs. Clay Guida.