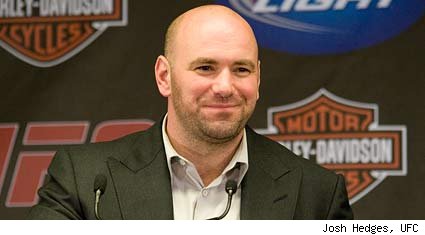 "I think it's ridiculous," White told Mike Chiappetta on the Inside The Ultimate Fighter podcast. "People think we're anti-competition? We're anti-dumb competition. Doing stupid things like this, putting a 50-year-old guy in the Octagon for the first time, and then going out there putting out press releases like it's a big deal because you signed a 50-year-old Herschel Walker? Are you serious?"

White suggested that Strikeforce's partnership with Showtime has changed the way it does business, for the worse.

"Strikeforce is a small, little, regional show," White said. "The geniuses over at Showtime, these guys are the most arrogant, cocky, pompous jackasses I've ever met in my whole life."

"Which athletic commission is going to let this guy fight?" White asked. "Who the f**k are they going to find to fight Herschel Walker? A guy in a wheelchair?"

In reality, athletic commissions sanction fighters with no experience all the time: Everyone has to start with an 0-0 record. And while it's true that not many of those fighters are 47 years old, not many of them are world-class athletes, either. If Strikeforce wants to make the Walker fight happen, it can find a sanctioning body and an opponent to make it happen.

But that doesn't mean White has to like it. Said White of Strikeforce's decision to put Walker in the cage, "It's completely disrespectful to the sport."
What do you think off Herschel Walker fighting for Strikeforce? Tell me on Twitter @MichaelDavSmith.