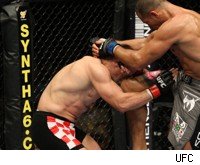 DALLAS -- With a small sample size of fights to analyze, it's sometimes difficult to accurately assess whether a young fighter is a contender or pretender. But in the case of Junior Dos Santos, it seems safe to say he falls into the first category.

The Brazilian striker looked crisp and powerful in his demolition of Mirko Cro Cop. The Croatian verbally submitted after complaining of vision problems, but the outcome was virtually assured by then. Dos Santos was simply bigger, faster and better.

It shouldn't have come as a big surprise. After all, Dos Santos knocked out perennial contender Fabricio Werdum last October, needing just 81 seconds. But there were still some who wondered if that was a fluke. Then in his follow-up, he knocked out Stefan Struve even faster, requiring just 54 ticks of the clock. Then the critics said Struve was a step down in talent competition. Who's doubting him now?

He comes from a camp that guarantees him a chance to learn under masters. Dos Santos trains extensively with former PRIDE champ Antonio Rodrigo Nogueira and UFC middleweight champion Anderson Silva, among others. This is a man who sees top-level MMA stars every day, so he's not likely to be overwhelmed by anything he sees in the cage.

Nogueira knows a thing or two about heavyweight fighters, and he says he's blown away by Dos Santos' talent.

"He's going to be a future champ for sure," he told FanHouse. "Without a doubt. He's strong, fast, athletic. He has good wrestling, good ground game. He's a complete fighter."

Dana White was also impressed with the performance.

"Dos Santos is no joke," he said. "That definitely put him on the heavyweight map right now. He's in the mix."

While one star rises, another fades.

During the fight, Dos Santos brutalized Cro Cop from the outside, stalking him around the perimeter cage. Cro Cop had a tough time firing off offense under the pressure, and ended up with cuts and bruises on his face. After verbally submitting, Cro Cop walked back to his locker room with his face covered by a towel. The UFC forced him to visit a hospital for precautionary reasons before he hopped on a plane for the long flight home.

Cro Cop had won two in a row prior to the fight, but is only 3-3 with one no contest in his last seven fights. He's 2-3 in his five UFC bouts.

Dos Santos' success is well deserved. He came from poverty and was working in a restaurant just a few years ago, only able to focus on fighting full time with the help of his wife. In an attempt to help his marketability, he's worked hard at learning English, and addressed the crowd in English, telling them "the U.S. has been wonderful to me."

The sacrifice and sweat are paying dividends. At 9-1, Dos Santos is rapidly moving up the rankings ladder. When Brock Lesnar and Shane Carwin face off later this year, Dos Santos will certainly be an interested observer, because he may one day find himself in a similar type of match. Though he's nowhere near the size of those two behemoths (Dos Santos weighed in at 236 for this fight, far below Lesnar and Carwin who both cut weight to make the heavyweight maximum of 265), the guys who know him best say it won't be a factor when he gets his shot.

"He's made to be a champion," Nogueira said. "He's got a great future and there's a lot of wins ahead of him."