Mayhem Miller: I Entertain the Masses 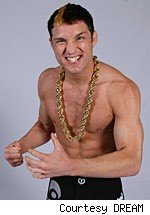 Jason Mayhem Miller became a professional mixed martial artist in 2001, and he's long been known to MMA fans as an entertainer, from the way he dances into the ring to his style of fighting to his post-fight interviews.

But it was only when he became the host of MTV's reality show Bully Beatdown that Miller started to reach an audience beyond the hard-core MMA community. For Miller, however, moving from fighting to TV was an easy, natural progression, because he says he views both jobs as simply an opportunity to entertain.

In an interview with FanHouse, Miller talked about his TV show, his past and future MMA fights, and why he doesn't care if he ever returns to the UFC.

Michael David Smith: When you first got into MMA, did you think it would lead to the kind of fame where you had your own TV show?
Jason Mayhem Miller: Do you want to know the truth?

Yes.
I thought I was going to look like my dad, who's a big, strong, Arnold Schwarzenegger-looking guy, and that I'd be a movie star because of that. But as it turned out, I look more wild and gangly, and I got my mom's sense of humor, and so a show like Bully Beatdown worked better for me.

I thought I would be a famous guy off fighting and I would use it to break into another career, but I didn't think I would have my own funny show like this one. It was only recently, in the last couple years, that I realized I could be a funny guy and that could be a big part of my life. It's weird how life works out that way.

Did you always know you had a talent for humor?
Oh, yeah. I was class clown, non-stop, and still am. If you look at what I do, I'm permanently 12 years old. I'm beating up the bullies on the playground for lunch money.

Is making an action movie still an ambition of yours?
Not necessarily action movies, but I just want to use all the skills I have. I'm a writer, and I've developed that skill over the years. I do comedy on Bully Beatdown, and that's a skill I've developed. I look at acting the same as fighting: It's a skill I develop. I have my natural talents, but natural talent alone won't get you anywhere. You have to develop that talent by working really hard and trying to be the best at it. When I put all my energy into acting, I'll be one of the best actors anywhere. I go about it that way: You take your natural talent and you work at it so you can be good at it.

The show's second season just started airing. How did the second season compare to the first?
This season blows the doors off the first. The first season they just put the camera on me and were like, "Say something funny." Now we've got it down to a science with a team on the production who are all on the same page. We all know what we need to do and we have the shows designed perfectly to be the most entertainment you can pack into 22 minutes plus commercials.

Is it hard to juggle training as a fighter with Bully Beatdown?
Absolutely, but more as a scheduling thing. I just have to schedule it so I can get in one hard workout a day in. I don't schedule fights within six weeks of filming Bully Beatdown, so I have time for a full training camp, and Bully Beatdown only takes two weeks.

You said recently that you're preparing to fight Jake Shields for the Strikeforce interim middleweight title.
After I announced that, they told me that's not finalized. The fight business is very finicky. For some reason, my manager came back to me and said, "They're not 100% sure." I don't know. I would love to beat up Jake Shields.

Aren't you and Shields friends? Do you have any qualms fighting him?
It's the fight business, man. I have no problems fighting anyone, even my dad. I've done that a million times.

You're well known for your entrances. What will your entrance be like for your next fight, and how much time do you spend planning those?
Everybody asks me that and I want you to print this so people stop asking me: I never tell. You know why? Because I don't know. It comes to me in a wave of inspiration, right before the fight. I think, "How am I going to express myself through the walk-out dance this time?" And every time I think of some really interesting way to put a spin on walking to the ring.

You've had one fight in the UFC, a loss to Georges St Pierre. Do you want to get back to the UFC?
Not really. Everybody talks about the UFC. I really respect the fighters in the UFC, and they are the biggest show in the United States, but to me everything is a business decision. When it's worth it to them for me to be in there and it's worth it to me for me to be in there, then I'll go.

Do you think the UFC tries to strong-arm fighters into signing contracts that aren't good for them?
Of course. Is that a secret? Is that something people don't realize? Maybe the common fans don't know what goes on behind the scenes, but if you're in the UFC you're in the biggest show, and with that is a trade-off. It gives you the opportunity to make the most money and have the biggest sponsors, but the trade-off is the UFC owns you. Fighters have to determine whether it's worth it to them to give up those rights to be able to fight on the biggest stage in the United States.

You're on Twitter a lot. What do you like about it?
I love Twitter. Twitter gives me a creative outlet for the random thoughts that pop into my brain. If I can use it to amuse my fans for one minute a day, I'm really pumped. I'm all about having some fun. If people are giggling on their commute to work or while walking down the street about some random thing I said, I'm pumped.

After your fight with Ronaldo "Jacare" Souza in May, you were saying a lot of nasty things about him on Twitter. Do you have some personal animosity toward him?
Yes. I feel like he doesn't respect me as a fighter. The tone of his interviews -- and maybe the translation of the Portuguese is coming out wrong -- he talks about me like he doesn't even respect me. I came off knee surgery to fight him, and he still doesn't respect me? That kind of gets under my skin. Maybe we just don't communicate and he doesn't understand that I try to have fun with everything, but with things he's said, it went from me being mildly annoyed with him to now I really dislike him.

He's beaten you once by decision and then you had a no contest when you injured him with a kick while he was on the ground. Do you expect to fight him a third time?
Of course. Someone's got to make it happen eventually. He ain't going anywhere and I'm not going anywhere. We'll eventually run into each other.

You've described yourself as a devout atheist. What does that mean?
Exactly what it sounds like. I don't believe in God, the common conception of a higher power.

Is there a part of you that hesitates to say that? That's not exactly a popular thing for a TV star to say.
Not really. If people are going to hate me for that, that's their problem. There are plenty of other things to hate me for. And a lot of my close friends are devout Christians, and we're still friends. I respect their views and beliefs and they at least tolerate mine.

What else do you want fans to know?
I'm just pumped that this season is 10 times better than the last. Everybody watching will have a damn good time. I put all my motivation into that project, and every time I do that, it comes out big.

Making sure everybody watching has a good time seems to be your goal no matter what you do.
I'm an entertainer first. That's all I do. The main way I entertain people is by fighting, but now I do it with my TV show, too. My goal is to entertain the masses.