MMA Is No Breakthrough for Women 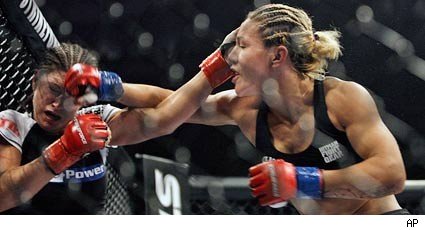 We've just witnessed the greatest advancement for female sports since Brandi Chastain ripped off her shirt at the end of the World Cup.

So why does it feel more like a punch to the stomach?

I'm talking about last weekend's MMA bout between Gina Carano and Cristiane "Cyborg" Santos. It supposedly is the breakthrough battle that will make female fighting mainstream.

It came days after the International Olympic Committee approved female boxing for the 2012 Olympics. The ancient Greeks who started the Olympics treated women like property. Now we're letting women treat themselves like animals.

This, of course, is seen as progress. Maybe it's the thought of a female Chuck Wepner, but I don't see much enlightenment.

I can't rationally argue women shouldn't be allowed to beat themselves bloody. It's more an emotional repulsion that makes me hope these breakthroughs are overblown.

On a practical level, I doubt the Carano vs. Cyborg was the fighting equivalent of the 19th Amendment. When it comes to female fighters, the MMA still has less depth than Paris Hilton. Carano was its Danica Patrick, and now she's been beaten by Ivan Drago.

We all know that looks matter, which is why the WWE long ago replaced the Fabulous Moolah with pole dancers. If female combat is going to ever make it big, it will need competitors who look like strippers and fight like bouncers.

That concludes the Male Chauvinist Pig portion of this column. Honestly, I don't think a woman's place is on the sideline waving a pom-pom. I'm all for equal pay, a female president and my daughters growing up in a misogyny-free world.

I just don't care to see them in a boxing ring, even if they're beating up some Russian for a gold medal.

Women are called the better half for a reason. They are better than men.

In general, we are territorial, hunter-gatherers, hard-wired to see who is the king of the jungle. Women will show more fight than 10 men when their children are threatened, but they need a good reason to drop the gloves. Men just need an excuse.

You may consider that Neanderthal reasoning. I think it's human nature prompted by visions of my mother looking like Tex Cobb or babbling like Meldrick Taylor.

It's the same feeling I get about women on the front lines in Iraq or Afghanistan. As much as I hate the prospect of a young male soldier getting captured and tortured, the mere thought of a female getting that treatment is horrifying.

In our gender-equity world such considerations don't matter. The MMA and boxing aren't war, but something is odd when Gloria Steinem and Don King come down on the same side of an issue.

Women have every right to earn a living beating each other up, and some are very good at it. I'd last about 16 seconds in the cage with Cyborg, assuming she spent the first 10 seconds laughing at my physique.

There is obviously an audience for what she does. The Carano fight headlined the Showtime pay-per-view, and 13,524 showed up at the HP Pavilion in San Jose.

From all accounts, the crowd loved it. Of course, some people like snuff films and Michael Vick's ex-hobby. And our ancestors had season tickets to the Christians vs. the Lions.

At least we've dialed it down to boxing and MMA. I'm not a big fan of the steel cage, but I'm not against it. It taps into our historic thirst for a little bloodsport. Of the hundreds of sports events I've covered, nothing matches the primal buzz right before a title bout.

If nothing else, I'll never become a member of the IOC. The movement began in the Cradle of Civilization, and now the modern minds have decreed that women should be allowed to knock each other's heads off.

If TV ratings are promising, expect female MMA by the 2020 Olympics. Thousands of young girls may be inspired to become the next Cyborg.

If you see this as progress, so be it.

For some reason, it doesn't make me feel any more civilized.