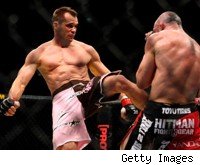 Vitor Belfort will return to the UFC in a 195-pound* bout against Rich Franklin at UFC 103 on Sept. 19 in Dallas, the promotion announced Friday.

Franklin (25-4) was originally announced to face former PRIDE middleweight and light heavyweight champion Dan Henderson (25-7) at the event, but due to the lack of interest in the rematch from UFC 93, the UFC shuffled the main event.

"The fans didn't like it, so we're going to change it," UFC president Dana White said Friday.

Belfort (18-8), coming off knockout wins at Affliction over Terry Martin and Matt Lindland, is one of the many Affliction "Trilogy" competitors picked up by the UFC following the cancellation of the Aug. 1 event.

Henderson, meanwhile, will sit in the sidelines as he awaits a title shot against Silva.

*White announced the bout for light heavyweight, but Belfort has since requested it to be at 195 pounds and Franklin has accepted.