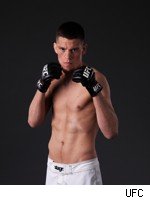 Ten bouts have now been official to finalize the UFC Fight Night 19 card scheduled for Sept. 16 at the Cox Convention Center in Oklahoma City.

In the evening's headliner, The Ultimate Fighter 5 winner Nate Diaz will look to avoid three straight losses in a lightweight showdown against season two's Melvin Guillard.

The event could also mark the final UFC appearance (in the near future) for Roger Huerta, whose plan is to pursue acting career after the completion of his contract. He'll take on the rising contender Gray Maynard.

The UFC Fight Night 19 presentation on Spike TV will be immediately followed by the season premiere of The Ultimate Fighter 10: Heavyweights.
FIGHT CARD: Spike TV