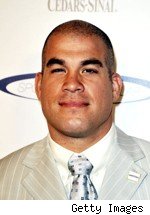 Ortiz has re-signed with the UFC, extending an on again, off again relationship that has spanned 12-plus years with the company and even longer with his former manager and current UFC president Dana White.

"I think time really cures everything," Ortiz (15-6-1) said Friday during a UFC media call. "Dana came to me, he was a man of his word, and he apologized to me for the things he did prior.

"We're kinda like boyfriend-girlfriend – of course him being the girlfriend," Ortiz jokingly added.

The last time Ortiz was in action was at UFC 84 in May 2008 in a unanimous decision loss to current light-heavyweight champion Lyoto Machida. Ortiz exited the final fight on his contract under poor terms, claiming that he would not re-sign with the UFC as long as White was serving as the company's president.

It wasn't until over a year later, during UFC 100 weekend, that Ortiz and White took a step towards making amends, and within the next week, Lorenzo Fertitta and White flew down to Ortiz's house to iron out their differences and finalize a deal.

The terms of the agreement were undisclosed, and Ortiz, 34, declined to specify the amount of fights on his contract, but said he will finish his career with the UFC.

Ortiz had appeared headed towards Strikeforce but said he changed his mind in order to fight against the best in the world through the UFC's highly competitive 205-pound division.

"For me personally it was about competition," Ortiz told reporters. "My fans deserve the best Tito Ortiz. Financially and everything I'm okay, I have nothing to worry about that. It was just my name and reputation I have to stand for."

Ortiz underwent back surgery last October and has only started training again this week, and no return date has been set, but Ortiz, depending on his recovery, is eying for a return sometime in November or December. As for his first opponent back, talks are in place with Mark Coleman, who is coming off a win at UFC 100 against Stephan Bonnar.

And now that Ortiz and White have reconciled, they hope the focus returns to the fighting inside the Octagon, not outside.

"I think the fans are just as over the Dana-Tito [expletive] as we are," White said. "It's exciting to have him back 100 percent, get him in the mix at 205, and none of the [expletive] drama with me and him."