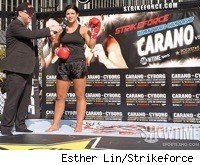 You can add Mauro Ranallo's name to the growing list of MMA personalities who have agreed to be a part of EA Sports' new mixed martial arts video game. FanHouse has learned that the Strikeforce announcer and Fight Network Radio host will be the voice of the game, which is slated to be released in 2010. No word on who will be joining him in the virtual broadcast booth.

Ranallo could not be reached for comment, but he has dropped hints of his involvement in the game on his radio show.

"EA Sports video game ... interesting that Fedor [Emelianenko] has signed with that. I just hope the announcing is good," Ranallo said on Wednesday's edition of Fight Network Radio.

Ranallo is also host of "The MMA Show" on The Score in Canada, and used to do play-by-play for Pride Fighting Championships and EliteXC.

Along with Emelianenko, other fighters who will be appearing in the game include Gegard Mousasi, Renato Sobral, Randy Couture, Frank Shamrock, Jay Hieron, BenjI Radach, Tim Sylvia and Tim Kennedy.

UFC president Dana White recently stated that he was "at war" with the video game developers because he claims EA once turned down doing business with them.

Instead, the UFC struck a deal with THQ, and released the critically-acclaimed "UFC 2009: Undisputed" game in May. The game has reportedly shipped approximately 3 million units globally since its release.

White has also publicly stated that any fighter who chooses to be a part of the game "won't be in the UFC." White added that Randy Couture, who returned to the Octagon in November after a year-long contract dispute, would be the exception to that rule.