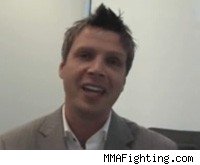 M-1 USA Vice President Jerry Millen says M-1 is only asking for what is best for the sport.

It's not about the money, Millen says, it's about the growth of the sport.

In this exclusive interview with FanHouse, the former PRIDE USA VP discusses Fedor Emelianenko's legacy, co-promotion, the current negotiations and more.
Ray Hui: If the UFC deal doesn't happen do you think Fedor is being sacrificed for the sake of the sport?

Jerry Millen: No Fedor's not being sacrificed because Fedor is going to fight. I think wherever Fedor fights, it's gonna be whatever's best for the sport of MMA. At the end of the day those fans [that are complaining now] are going to say "Fedor made the right choice," because he did what was best for the sport and what was best for MMA. Maybe he will be in the UFC, but it's gotta be a co-promotion. We're not asking for anything that's crazy, we're willing to take half the risk. We're willing to take half the profit or half the loss. What I meant by sacrificing was Fedor possibly sacrificing his legacy, because the fights people want to see are against UFC fighters.

I understand what you have to say but at the end of the day, you have to remember: Brock Lesnar has what, like five MMA fights? He's a champion because they put him in that position. If he was not a big guy from the WWE with a name, do you think he would have gotten a title shot in 3-4 fights?
Most likely not.
No, there's heavyweight fighters in MMA that have got 20-30 fights that have gone to war, and they're great fighters, and if I were them I would be pissed that they let this pro wrestling come in and give him a title fight right away. At the end of the day, I don't care what Dana says, it's about money to them. Dana White does not care about the best fights, he cares about the most money.
Who would you rank as the top five heavyweights? Obviously, Fedor is no. 1.

Fedor. Josh is up there. Nogueira, I still think Nogueira just because his fight against Frank Mir, Nogueira was sick in that fight. I know he was in the hospital 18 days prior with staph (infection), so that wasn't the Nogueira you see. Other than that, to me it's such a toss up. Brock's a good fight, don't get me wrong, I mean his style is to get the guy down and hammer him. Is he in the top five? I don't know, I don't think he's proven himself yet.
Going back to co-promotion, so you're saying co-promotion for M-1 means a 50/50 investment between the two parties?

Yeah, yeah. You sit down with the hard numbers. What's the fight purses? What's the venue? What's the advertising budget? Travel, food, throw it all in a pot, split it down the middle, and at the end of the event if the ink is black and there's a profit, split the profit, and if the ink is red, then just split the loss.
How has other miscellaneous topics that have been reportedly been an issue in the past, such as Sambo, the inclusion of other Red Devil (Fedor's camp) fighters, the amount of M-1 branding, played into negotiations?

You know all of that stuff is negotiable. If the UFC would have sat down, and conducted as a true co-promotion and say "ok we'll do half M-1 fighters, and half UFC fighters," all that can be worked out. At the end of the day it's about the main event card. That's what they want: Brock vs. Fedor. Everything else can be worked out as long as they're willing to work with us. That's all. And at the end of the day if you're really a fan of the sport – not a fan of the UFC – You got to step back and see what is best for the sport. Fedor sell his soul to the UFC for an X amount of dollars? Or break their model? I know they have a business model but to me they're the WWE of MMA.

You know they create their own rankings... Think about the guy whose busting his ass in like Cleveland, Ohio, you know everyday training MMA, he wants a shot at the best fighter in the world – cause there's always a better fighter somewhere. If the UFC doesn't deem him good enough to be in the UFC then how will you ever know if he's that champion? There's got to be more than one organization. There's a lot of guys out there training the sport around the world that deserves shots and just because they don't get a shot in the UFC doesn't mean they don't deserve a shot to be in the top ranking of MMA worldwide.
Dana White has said in the past there's no way they'll co-promote, and M-1 requires co-promotion. Does this mean there's no way this deal can work out?

My thing is this: Dana says there's no way he's going to do a co-promotion. How bad does Dana want to prove his fighters are the top in the world? If they want to say they got the top fighter in the world. Prove it. We're willing to prove it. Fedor's willing to fight anybody anytime. And he is, he's willing to fight anybody [but] on equal terms. We're not asking for more. We won't settle for less -- we're not asking for more though. Fedor will fight anybody on equal terms. So if Dana believes he has the best fighters in the world then shut up or put up. It was the same thing when I was at PRIDE. We got the best fighters in the world. Let the fighters fight. This is what it's about: the fighters fighting. Dana's made enough money, now let the fighters fight. If the fans want to see Fedor and Brock Lesnar, then let them fight. Whatever it takes, let them fight.

Obviously they want to make the most money, but if they truly care what the fans want to see, then they'll do pretty much whatever it takes to make that happen cause we're asking for just equal treatment. That's it. That's all that is.

Do you think they have more to lose than gain? The argument is that they're possibly building up a competitor. They are already at the top, there's no reason to give someone else the spotlight.

Its not about giving us the spotlight. The reason is if the UFC really cares about the fans and giving the fans the best fights, they'll do whatever it takes to give fans the best fights. We're not asking for more than what's fair, we're just asking for it to be a level playing field. We have the best fighter in the world. The fans want to see it. If the UFC really cares about what the fans want to see then do a one-two-three fight co-promotion. Make it to where Fedor beats Brock twice, they got to fight a third time. Then what'll happen is that Fedor will beat Brock three times and he'll have to go onto a fourth fight, and maybe a fifth, and then maybe Fedor will slip and Brock will get lucky (Laughs.) You know it can go on forever, but if the UFC really cares, honestly, they really care what the fans want then they can make the fight happen. They know they can.
During the presser on Wednesday Fedor's attorney almost sounded like he was threatening Affliction with a lawsuit. Is that in regard to Afflction canceling Fedor's fight and Fedor not getting paid, or is that to free him of the one fight left on his contract?

You know you'll have to speak our attorney on that. I can't speak on behalf of that.
So it's possible that Fedor's one remaining fight could be a hindrance to a UFC deal?

Anything to do with those comments I have to pass over to the attorney.
What are your thoughts of Aleksander (Fedor's brother) saying Vadim Finkelchtein (M-1 President and Fedor's manager) is holding Fedor back?

Fedor made the comment about what he thought about Aleksander's comments (Fedor said he doesn't see it the same way his brother does). All I'll say is that Vadim Finkelchtein is, he's a great person. He really is, he's an individual that cares about the fight game, he cares about his fighters and he cares about Fedor. And he's an honest individual. I've known Vadim for seven years now and he's been nothing but great to me. So I can only tell you about my experience with Vadim. He's an honest person. Vadim doesn't need the money. Vadim has other businesses in Russia, he's not in this to be a billionaire. Vadim's motivation is not money. It's about respect.
To say the least your relationship with Dana White is shaky at best. Could that be an issue down the line?

Honestly I hope we'll see Fedor fight somewhere in the next three, four months, cause he's ready to go. He's ready to smash somebody. I was hoping it would be this weekend but unfortunately it's not. We'll have to wait just a little bit longer. And who knows, maybe he'll be smashing Brock Lesnar next. Anything is possible. If Brock Lesnar wants to prove he's the no. 1 MMA heavyweight in the world, then he should step up and fight Fedor. You got to remember Brock Lesnar left the WWE because Vince McMahon owned him, he didn't want to be owned by anybody. Well now Brock Lesnar is owned by Dana White and the UFC, so he's owned again. So how long will Brock Lesnar is going to sit there and say he's the champion? Because he's the champion of the UFC but he's not the champion of the mixed martial arts world.