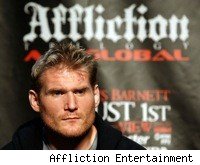 Through his manager, Shannon Hooper, Josh Barnett released a statement late Wednesday night about his recent failed drug test, which led to the California State Athletic Commission denying him a license to fight Fedor Emelianenko at the now-canceled "Affliction: Trilogy" event. Barnett was never directly quoted in the release.

"Mr. Barnett vehemently denies intentionally ingesting any banned substances in preparation for the August 1st fight and he is looking forward to presenting his case to the California State Athletic Commission."


Of course, the key word in that phrase is "intentionally." The release also stated that Barnett was "was shocked at these allegations" and is still awaiting the results of his B sample testing. It went onto say that "the documentation that Mr. Barnett has received raises serious questions about the integrity of the sample and the validity of the results themselves."

The CSAC's executive assistant officer, Bill Douglas, told FanHouse last week that he was confident in the validity of the test.

"The inspector that observed this particular test is one of our drug testing experts in terms of the correction procedure, and works on many events of this nature, and oversees a lot of the drug testing that's performed by our staff," Douglas said. "In this particular case, this was a hands-on test that he performed himself. So in terms of the correction procedure, it was flawless as recognized by the laboratory upon delivery of the sample the same day. And in terms of the lab itself, we have been using the same lab that tests the NFL and the International Olympic Games, as recently as the last Games, they tested every sample ever took there. They test the NCAA for all the sports, all minor league baseball. It's a very, very tough lab to dispute - the best of them all."

Douglas also mentioned that this was the first time the California State Athletic Commission had ever performed a random drug test.

The release also mentioned that Barnett was "extremely disappointed" that Affliction decided to cancel "Trilogy."

"Josh is as disappointed as all of his fans and supporters that he will not be fighting on August 1st. He also empathizes with all of the other fighters that were scheduled to appear on the card and shares their frustration and shock at the cancellation of the entire event."