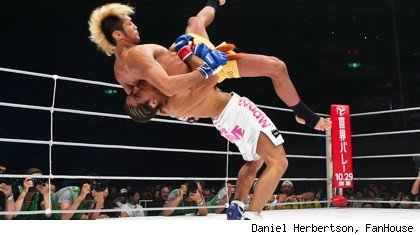 DJ.taiki will place another bid in the DREAM Featherweight Grand Prix in a meeting with Kazuyuki Miyata as alternates at DREAM. 11 on Oct. 6 in Yokohama, Japan.

DREAM made official Thursday the reserve bout along with the previously confirmed semifinal pairings, Joe Warren (2-0) vs. Bibiano Fernandes (5-2) and Hiroyuki Takaya (9-6-1) vs. Hideo Tokoro (21-14-1). The winners meet the same night to crown the first DREAM featherweight champion.
DJ.taiki (11-5-3) won in the opening round over current semifinalist Tokoro but was forced out of the quarterfinals due to a fracture in his right orbital bone. He's been unbeaten since November 2007, when he dropped a decision to current Sengoku Featherweight GP semifinalist and still undefeated Brazilian Marlon Sandro.

Kazuyuki Miyata (7-7) is also returning to DREAM tournament action, but as a featherweight. Miyata competed in the first-ever DREAM in March 2008 and was eliminated from the Lightweight GP in a loss by submission to Luiz Firmino. This year Miyata moved down to featherweight and won both his fights at DEEP events.

In addition to the possibility of stepping into the finals, the winner of Miyata-DJ.taiki will improve his ranking with DEEP. Both fighters are contenders for the promotion and a win here could bring on a title challenge against champion Dokonjonosuke Mishima.