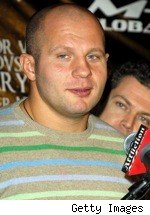 For a brief moment on Tuesday, the MMA world held its collective breath when news broke that Fedor Emelianenko and the UFC were "finalizing" a deal.

Lance Pugmire of the Los Angeles Times reported on the newspaper's Web site that a deal between both sides "is expected to be announced by UFC President Dana White on Friday." However, several hours later, M-1 Global's Apy Echteld told SI.com's Josh Gross, "I can give you a guarantee it's not accurate."

Pugmire, however, is standing by his story. Kind of.

To make sure about the Times' report, another source close to M-1 told FanHouse, "It's more than premature -- it is based on no fact whatsoever."

Unless M-1 has decided to hold their cards very close to their vest, it seems as though both sides aren't close to a deal after all. Heck, another source told MMA Junkie on Wednesday that the Times report is "untrue."

Who are we to believe?

It's hard to simply ignore a report of this magnitude from a mainstream news outlet. So I am hesitant to just brush the Times' report aside. However, in this particular case, there appears to be little smoke or fire, if you know what I mean.

M-1 is scheduled to hold a press conference at 4 PM ET. Something tells me they won't be announcing the date of Fedor's Octagon debut then.

"Just filed an update on ufc-fedor negotiations. They continue but are complex and will likely drag past ufc friday conference call."

The UFC is still scheduled to hold their conference call on Friday, which likely indicates that Fedor signing with the organization was never the reason for it in the first place. Stay tuned.