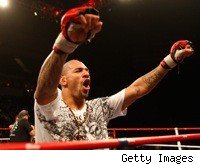 Jay Hieron, who was scheduled to face Paul Daley at "Affliction: Trilogy" before the show got canceled late last week, has agreed to face Nick Diaz for the Strikeforce welterweight title on August 15. Hieron's agent, Ken Pavia, confirmed the news with FanHouse on Wednesday. The event airs live on Showtime from the HP Pavilion in San Jose, Calif.

According to Pavia, Hieron's new deal with Strikeforce is for two fights, which was what he had left on his Affliction contract. Hieron had been fielding offers from other organizations, but the opportunity to fight Diaz for a title proved to be one of the major reasons as to why he signed with Strikeforce.

"I couldn't turn down an opportunity to fight for a title shot," Hieron told FanHouse. "I had other offers on the table and with the UFC. I just signed a video game deal that I was obligated to [and] I couldn't get out of it."

Hieron confirmed that he had already signed with EA Sports to be a part of their upcoming MMA video game, which proved to be a road block in negotiations with the UFC since they already have a video game deal with THQ.

"UFC stepped up the offer for me. It was a great offer, but again, I signed a deal with EA Sports. I was definitely surprised and I was ready to go back to the UFC. I got a great opportunity with Strikeforce, though, and I'm excited to fight for a title."

As for his opponent, Diaz (20-7), Hieron (17-4) says he is ready to face one of the best welterweight fighters in the world.

Diaz was originally scheduled to face Joe Riggs for the title, but Riggs had to pull out of the bout late last week.

The winner of the bout will be crowned the first Strikeforce welterweight champion. Other title fights scheduled for the card are Josh Thomson vs. Gilbert Melendez for the lightweight title; Renato Sobral vs. Gegard Mousasi for the light heavyweight tile (a fight picked up from the ill-fated "Affliction: Trilogy" card); and Gina Carano vs. Cristiane "Cyborg" Santos for the women's featherweight title.