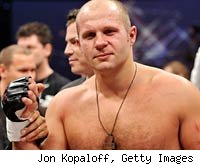 The heavyweight champion of mixed martial arts and the sport's biggest promoter appear to have a major sticking point in negotiations that will keep them from coming together any time soon.

Fedor Emelianenko, widely recognized as the best heavyweight in MMA, reiterated at a press conference Wednesday that he does not intend to sign a contract with the Ultimate Fighting Championship unless the UFC agrees to promote fights jointly with Fedor's promoter, M-1 Global. The UFC has offered Fedor a contract but has steadfastly refused to become business partners with M-1.

And that means there's not much reason for optimism that we'll see a true MMA heavyweight title fight between Fedor and Brock Lesnar, a fight that would be the biggest in the history of MMA.

Still, some MMA fans are finding optimism in a couple of reports suggesting that negotiations between Fedor and the UFC are not dead. The Los Angeles Times continues to report that Fedor and the UFC could reach a deal, despite M-1 officials stating flatly that the Times' report Tuesday of a deal being finalized were inaccurate. And MMA Junkie reports that a source close to the UFC says Fedor could be brought into the fold this week.

That, however, contradicts all the indications from Fedor and his business partner, Vadim Finkelchtein, at Wednesday's press conference. The folks from M-1 insisted that Fedor's status as the best fighter in the world should entitle him to more favorable contract terms than other fighters have gotten from the UFC. So unless the UFC is prepared to cave in and give Fedor the kind of deal it has never given any other fighter, Fedor will continue to fight outside the Octagon.