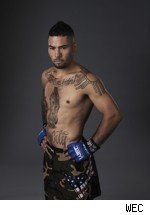 A bout between two top 10 bantamweights has been signed for WEC 43 on Sept. 2 in Youngstown, Ohio.

FanHouse has learned that Damacio Page (11-4) will take on former Shooto 143-pound champion Akitoshi Tamura (13-7-2) at the event headlined by an interim lightweight title bout between Donald Cerrone and Ben Henderson.

Page, a striker out of Greg Jackson's gym in Albuquerque, New Mexico, is coming off a brutal knockout win over Marcos Galvao at WEC 39. In the 18-second fight, Page dropped Galvao with repeated right hooks and followed with two more rights on the ground that left Galvao unconscious and with a seizure inside the cage. Fortunately, tests after the fight cleared Galvao of any serious injuries. Page is 2-1 in the WEC with the sole loss against current No. 1 contender Brian Bowles.

Tamura made his WEC debut last December at WEC 37 after spending over seven years fighting almost exclusively for Shooto in Japan. However, his debut was spoiled by former IFL champion Wagnney Fabiano with a arm-triangle choke with 12 seconds remaining in the fight. Tamura then decided to drop down to bantamweight and won a unanimous decision over former title challenger Manny Tapia at WEC 40.

The winner of Joseph Benavidez-Dominick Cruz at WEC 42 appears next in line for the title, but the winner here between Page-Tamura could likely set up the title fight thereafter.