WEC to Stream Events Outside US 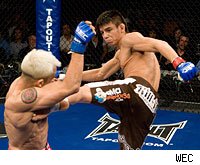 Starting with WEC 42 "Torres vs. Bowles" on Aug. 9, the WEC will introduce live streaming for fans outside of North America.

WEC Vice President Peter Dropick said Tuesday that based on international demand, specifically in Japan, future WEC events will be available on WEC.tv and UFC.com.

"We've seen a lot of buzz coming out of the other markets," Dropick said. "Recently we had some meetings in Japan. [Takeya] Mizugaki has gotten a lot of media interest, so Japan is one of the areas we really wanted to target so we set this up so you can see it on our website on Aug. 9."

The webcast, which carries a price tag of $9.99, is English-only and will show the same number of fights as the Versus broadcast. The feed will be geo-blocked in North America so that viewers will watch the event on Versus.