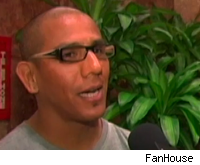 FanHouse spoke to Atencio via e-mail Tuesday evening and asked as much as we could given the constraints of interviewing someone over the Internet. Atencio requested the interview be conducted in this fashion. This is the first time he has publicly discussed the events that transpired last Friday. The full interview is below.

Ariel Helwani: Why did you ultimately decide to cancel the show?
Tom Atencio: There simply wasn't enough time to promote a new main event, especially for pay-per-view.

Are the rumors true that you were planning on canceling the show even before Josh Barnett tested positive for an anabolic steroid?
No.

Who made the final decision?
The team at Affliction Entertainment.

How close were you to finding an opponent for Fedor Emelianenko?
Quite a few fighters stepped up and were interested in the challenge, but nothing was ever finalized.

How hard was it for you to pull the plug on the show?
Canceling this fight was one of the hardest things I've ever had to do.

When you announced the cancelation of the show, was there already a deal in place with the UFC?
No. We made the decision to cancel the fight prior to any sponsorship agreement with the UFC.

How did that deal come about?
Based on timing, the deal came about and made sense for both companies.

How difficult was it to bury the hatchet with the UFC after everything that was said about you over the last year?
I've always said I'm about the future of MMA – the sport and the fighters. What happened last year is in the past and I'm looking forward to the future.

Will the fighters who were supposed to compete on the card still get paid?
I have worked out deals with most of the fighters at this time. In one form or another we are working out some type of compensation.

Looking back, do you wish you could have done anything differently?
Sure, hindsight is 20/20 and I probably would have done a few things differently, but overall I'm very pleased with what we were able to accomplish.

What becomes of your relationships with Trump, Golden Boy and HDNet?
Nothing has changed. Our relationship with each of our partners remains strong.

M-1 said Fedor only learned of the cancelation when he landed in the US. Is that true?
We contacted Fedor's reps in the US to tell them about the cancllation immediately. He was already en route to the States.

What's next for you?
I'm looking forward to doing more of the same: bringing the best opportunities to amazing fighters and helping them secure solid sponsorship deals.

Will Affliction and/or Tom Atencio ever promote another MMA event?
Yes, through sponsorship and the support of MMA fighters.

Where do you think Fedor will fight next?
I hope Fedor goes where he can fight the best heavyweights in the world. He is a true champion and I'd love to see him show the world he is the best fighter on the planet.