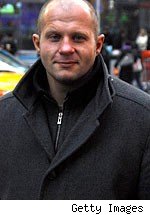 The Los Angeles Times is reporting that the Ultimate Fighting Championship and Fedor Emelianenko are finalizing a deal that would bring the heavyweight champion of mixed martial arts into the Octagon and would represent the most significant free-agent signing in the history of MMA.

The UFC said on Tuesday that news would be broken at a Friday conference call, and the Times report, which cites unnamed sources, says that UFC president Dana White will make the announcement that Fedor has been signed.

However, rumors of Fedor's imminent signing with the UFC have arisen before, and in the past those rumors have turned out to have no merit. The Los Angeles Times report came just hours after Fedor's promotion, M-1 Global, announced that Fedor will hold a press conference on Wednesday. It seems odd, to say the least, that Fedor and the UFC have scheduled separate media events if they're about to announce that they have joined forces.

And so we're left wondering whether the Times report is correct, or whether this is just another example of a Fedor-UFC rumor that doesn't pan out. A heavyweight title unification fight between Fedor and Brock Lesnar would be the biggest fight in the history of the sport, but fans shouldn't get their hopes up about it just yet. At least not before Fedor himself sheds some light on the report at his press conference on Wednesday.