Josh Barnett to Wrestle in Japan 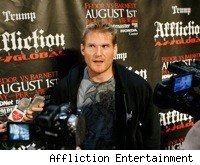 Josh Barnett's MMA career may be on brief hold, but his pro wrestling one isn't. "The Baby-Faced Assassin," very much in the news these days after it was announced last week that he tested positive for an anabolic steroid, which led to Affliction Entertainment canceling its upcoming event, will wrestle on Aug. 9 for Inoki Genome Federation in Japan. Barnett's manager, Shannon Hooper, confirmed the news with FanHouse on Tuesday.

Barnett is one of the few athletes who has been able to enjoy success in MMA and pro wrestling.

He has yet to talk publicly since posting a MySpace bulletin about the situation last Thursday.

"My representatives and I are working to gather as much info as possible and handle this situation as best as we can. I am embarrassed and want for nothing more than to resolve this issue and receive a license from the State of California as I have done many times already and for other states as well."

It will be interesting to monitor how the fans in Japan, as well as the Japanese media, react towards Barnett. Barnett has primarily competed in MMA and wrestling in Japan since leaving the UFC in 2002. It will also be interesting to see if Barnett actually comments on the situation.

As for his MMA career, no word on when and where Barnett will fight next, however, former EliteXC heavyweight champion, Antonio Silva, recently told Tatame.com that he would like to face Barnett in Sengoku.

Below is a clip of Barnett wrestling Tank Abbott at an IGF event last August.