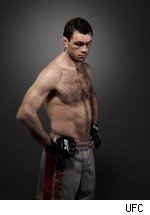 When I spoke to Forrest Griffin about his upcoming showdown against Anderson Silva at UFC 101 on Aug. 8, I got the sense that he wanted to talk about anything but that fight. Fine by me. The former UFC light heavyweight champion is one of the most personable and funny fighters in MMA.

Check out our interview below, where Griffin talks about everything from Kenny Powers to what he is looking forward to doing the most come Aug. 9. (Warning: explicit language below)

Ariel Helwani: The big rumor right now is that Tito Ortiz may be headed back to the UFC. Is that a loss you would like to avenge at this point in your career?
Forrest Griffin: Yeah, I think me and Tito would be a good fight. I think it would be a good seller. I know I want to fight him; I'm pretty sure he wants to fight me. So I think there'd be two guys with pretty decent names that could maybe put some a**** in seats.

Considering their history, would you be surprised if Dana White actually brought Ortiz back to the UFC?
No. You've got to think, those guys, they have a history together, if you think about it. At one point, Dana managed Tito. They have a history. They were friends, and they had a falling out, but there was initially a friendship there, you know.

Speaking of Dana White, he recently said that he will make a huge announcement later this week. Care to spill the beans?
Um, this is the first I've heard of a huge announcement. But I'll tell you what it is: from now on we're going to fight without gloves. No more gloves. Done away with.

I like it. Back to how it all started.
Yeah, no more gloves.

Have you moved up since then?
No, I think I've moved off the list (laughs).

Are you surprised by how well the book was received by the mainstream media?
Well, yeah. You know, you hope. It's like everything. At some point, I started working with Erich Krauss, the writer, and I realized, you know, we had x amount of time set up, and you're going to do this, and you're going to do that. And I realized that ... at some point I bought into it. That the book could be good; that Erich and me could come up with something good. That this guy was the guy that could help me get what I wanted out there. Maybe not just make a book about fighting, but make a book more about stuff that I'm more interested in. Like a book that I would actually read, that would amuse me. And so I kind of bought into it, and said, 'Hey man, we can make something good here.' And I tried, you know, as opposed to just picking up the paycheck, which when I signed on, I was just going to pick up the paycheck, and say, 'Blah, blah, blah, had some fights; put all my stuff in storage; that's my story, blah, blah, blah.' But you know, as we were going, I was like, 'Well then, I met this chick in a bar, and I couldn't get my [expletive] up, and it was hilarious.' So there were more stories that I liked.

Well, if it means anything to you, I enjoyed it.
It does, actually. You're from New York, man. People from New York have culture, so there you go.

Let's talk about the Silva fight. The last time we saw you in action against Rashad Evans, you were the favorite. Now, you're the underdog. And I heard you say recently that you weren't happy with your mental preparation for the Evans fight. So, are you feeling better on that front now?
To me, it depends on the workout. If I had a good workout that day -- if I did what I needed to do -- I'm feeling pretty good. So today was a good day. So today we're going to chalk it up, put one in the win column, and say, 'Hey man, I'm feeling good.' It's 15 minutes. I've really just got to pour it on for 15 minutes, and just go and try to make my heart explode.

So you are hoping to take the fight to him?
I have no choice. And I have to do it in a smart, controlled, but high-paced manner. I've got a lot of crazy things I got to do.

Who do you think has fought him the best in the UFC?
Well, I thought Nate Marquardt was doing alright, actually.

Until things went sour towards the end of the first round ...
He was doing good until he wasn't.

Do you believe Silva is the best fighter in the world?
Pound-for-pound, without a doubt.

Where would you rank yourself?
Um ... just under Bob Sapp.

Sounds about right. What do you think of Kimbo Slice appearing on the show you made famous, The Ultimate Fighter?
You know, if I didn't know Kimbo as a person, and know that he's not a good guy, I would have a lot of disdain and maybe a little envy towards him. But I know him to be an alright guy, who is very nice, respectful, [and] wants to learn the game. [He] just wants to make some money and make a living fighting. So I can't hold anything against him; he just wants what we all want. He's just doing what the rest of us are doing. Just hustling the best he can.

He came to Xtreme Couture to train with you guys once, right?
Yeah, he did. He came out there for a couple of weeks.

Were you impressed with his skills?
He's got a good skill set. The only thing I worry is that the guy's 35 years old, and he's trying to pick up wrestling and jiu-jitsu at 35. It was hard for me. Like, I felt at 22, when I started trying to pick these things up, that I was already behind the ball.

While we are on the topic of Internet sensations, are you familiar with this new trend athletes are doing where they post videos of themselves jumping out of pools? BJ Penn did it recently.
Apparently he jumped out of three feet of water onto the thing.

Yeah, and recently a football player, Keith Eloi, did it backwards. Would you ever try something like that?
If I jump out of a pool, I'm coming out naked wearing only a c*** ring. So I mean, I would be the ultimate Internet sensation.

So I take that as a no.
No, that's a yes. I'm going to do it actually. I'm getting a camera and going to the Red Rock pool. I'm getting my camera and my c*** ring. I'm jumping out ... maybe from four feet of water. Butt naked.

That would be amazing. Are you impressed by these feats of athleticism?
I think it's really hard, I don't know. Water kind of sucks you down. It's kind of weird, right?

Yeah. Who do you think will win the BJ Penn-Kenny Florian fight?
I like Kenny; he's my boy. BJ's a good guy and all -- I've met him. You know, me and Kenny have a history. I like him. He's Boston people; he's good people. And he's the underdog, too. So, I've got every reason to cheer for my boy, Kenny.

Where would a win over Silva put you in the light heavyweight title picture?
Man, you know, I don't care. It's a bit of a faux pas, you know to think ... I mean, I just want to not die. I just want to be alive on August 9, and then I'll be happy. If I could win that fight, I'll probably just never fight again. I'll probably just retire, and say I was the greatest ever.

Like George Costanza, right? You just got to go out on top.
Yes! Exactly.

What are you looking forward to doing the most come August 9?
... You know, just really a lot of drinking. I haven't had a drink since whenever those fights in Tennessee were. And I really feel like that's hindered my life as a person.

Are you going to go on vacation?
I am. I'm going on quite a vacation. Me and the wife are driving to Savannah.

That's "quite the vacation"? I figured something overseas at least.
I hate flying. My wife hates flying. I hate being overseas. You're a foreigner there, man. They can, like, kill you, and there's nothing you can do. Don't go overseas. I'm spending my money, my hard-earned money on a vacation at the Grand Canyon, seeing the beautiful stuff in America.

Who are two people you would like to fight before you retire?
I'm going to give you one, and you're going to settle with that because it's going to be awesome. My fantasy is to fight Kenny Powers.

I noticed you've been mentioning him in a lot of interviews recently.
Yeah. Kenny Powers is probably the guy that I most pattern myself after.

Are you a fan of that show, Eastbound and Down? I must admit I soured on it towards the end.
Well, in the beginning ... it's a tough premise to keep going. And what they had to do was try to make you care about the characters towards the end. And it's kind of an over-the-top thing, this character, and then when he's not being this character, what really is there, you know?

Would you like to be on that show? Chuck Liddell was on Entourage, so why can't you be on Eastbound and Down?
That's a good point. I should be on that show. And I can be another baseball player that's a bigger superstar athlete in the world. Either that, or I'll be on the show Party Down. Are you familiar with that one?

What's it about and what channel is it on?
Just look it up on the 'net. I think it's on Starz actually.

I don't get Starz.
I know it's not the pedigree of a good show. You can probably watch it on the Internet.

I'll look out for it. Finally, give us your take as to how this fight is going to play out?
It's going to be a bloodbath. It's going to end just in horror. Horror. Shocking and awe. Shock and awe, m***********.